By Justine Souchack, Sarah Command and Laura B. Whitmore

Portland-based rock act Portugal. The Man has been around for over a decade, but are still taking the world by storm. With more than ten years of touring, writing, and releasing, Billboard magazine summarized, "The Man's sudden flare-up on the edge of the pop mainstream is the result of more than a decade of rock & roll grind." The band's single, "Feel it Still," ranked #1 on Billboard's Alternative songs chart and landed a spot on Billboard's Hot 100's top five.

It's often said by hit writers that when you write a song, you know instantly if it's a special one. Did any of you feel like there was something different about "Feel It Still"?

"Woodstock" is filled with catchy hooks, stand-out lyrics, and a sound that is undeniably refreshing. One of the biggest challenges up and coming artists and producers face is finding their unique "sound." What advice would you give to producers and artists wanting to create a record that is truly their own?

Some of the coolest sounds that we made on the whole record were honestly just us messing around on equipment we didn't know. We would go into studios and producers and engineers would ask us about certain sounds and it was just really weird stuff we got in our basement. Honestly, it was just getting weird and just messing around with different things you don't know about and making new sounds.

Is there a particular synth plugin or sound bank that triggers inspiration for any of the members of the band? 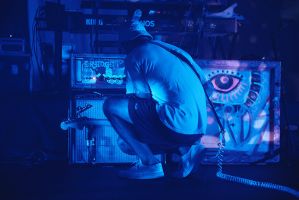 We always like writing on mellotrons. Mellotrons are always really fun. Everybody always jumps on it whether you play keys or not, I feel like you write cool stuff on it.

I think when the band got signed to Atlantic that was a turning point for us. Before it was kind of like going to school and putting in hours and hours, but that kind of felt like we graduated. Like the time we actually started writing records. Even though "In The Mountain" was not the first record, it felt like the first record where it was like you're out of college and it's time to do it for real and have this whole team behind you. That was a huge thing.

Hours in the studio preparing for an album release can bring lots of inspiration, laughs, and memories. Do you have one memorable recording moment that stands out?

We had some great times up at Shangri-La hanging out with Mike D. We were just recording at his house and over at the group studio. That whole time was super memorable because we lived in Mike D's house and recording at the Mike D studio in New York, at the Beastie Boys studio, that was one of the craziest things. That was actually really really cool because the Beastie Boys are a huge influence on us.

Do you ever write and produce on the road? What does that setup look like?

What is one way you get inspired that may surprise people?

We just watch video games and movies, that's how we write lyrics and stuff. Someone's like "we've got shit to do" and someone's just like playing video games and watching TV and it's like "I know I'm workin' right now."

Find out more at portugaltheman.com

19 Jun 201920 Years and counting: An interview with Arturia's Frederic Brun