Berklee College of Music held their first Voltage Connect Conference on March 10-11. I say first, because judging by the response from the presenters and the audience, there will be many more of these conferences in the future.

The initial inspiration came from the retirement of Berklee's VP of Strategic Innovation, David Mash, who has been a positive force in our industry for many years- 44 of them spent at Berklee in one capacity or another.

There needs to be an inspirational note about David Mash. David started his musical journey as a guitar player and attended Berklee, where shortly after entering, was asked to teach there. He was well on his way to virtuosity when he began experiencing problems in his left hand that played havoc with his guitar playing. He had two unsuccessful surgeries, and doctors advised him to give up the guitar. 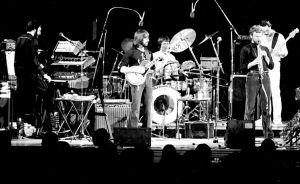 Like so many in the music industry, David had no choice but to be creative, so he sought another way to express himself with music. He discovered the monophonic synthesizer. He could play its keyboard using his right hand, and use his still damaged left hand to manipulate the parameter knobs. He sold all his guitars (ouch!), and purchased an ARP 2600 and sequencer. As luck would have it a few weeks later, he was touring as a synthesist with his band Ictus, opening for Dave Brubeck's band.

Like he had with the guitar, Mash threw himself into learning everything about a synthesizer, eventually became an expert. He wound up playing hundreds of gigs using the ARP 2600, and a variety of analog synthesizers, and eventually had the vision to start the Music Synthesis program at Berklee. That monumental change to his life has led to many good things for our industry. 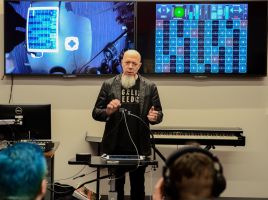 In addition to honoring Mr. Mash, Berklee hosted the event to create an environment where leaders in the music products industry who normally would only see each other at trade shows, where the emphasis is on selling, could all be together in a place where the focus was on the past, present, and future of musical instruments. In addition, Berklee could provide an environment where the discussions could be free and unpressured, and the leaders could have a direct connection not only with each other, but with a next generation of users of their products. With 4,500 students on campus at Berklee and the EPD department being one of the fastest growing, it was a perfect environment for this. 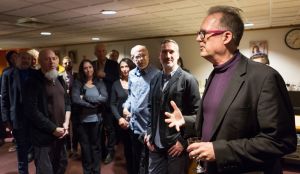 The list of presenters, most of whom were either friends of Mr. Mash, or people who he has interacted with over the years (as a representative of Berklee and a passionate product expert), was a virtual Who's Who in the world of electronic and software instruments. Among these leaders were Dave Smith (Dave Smith Instruments), Gerhard Lengling, (Creator of Logic and GarageBand at Apple), Ernst Nathorst Boos (Founder of Propellerhead), Marcus Ryle (founder of Line6). The list goes on, but you get the idea... In a somewhat fractured world, it was wonderful to see these past and current competitors learning from each other, and just enjoying each other's company at the various events.

The initial seed for the conference was planted in 1984, when David Mash had the vision that Berklee should offer an undergraduate degree to the rapidly growing group of musicians who played the synthesizer. He created the Berklee Music Synthesis Department (since expanded and renamed the Electronic Production and Design Department), which offered the first comprehensive curriculum in programming and performing with the synthesizer. Naturally, it quickly expanded to music production with software applications and plug-ins.

The event was organized in various venues throughout the Boston Berklee campus as a series of hosted panels, three keynote addresses, and an evening concert at the Berklee Performance Center. The many highlights included: 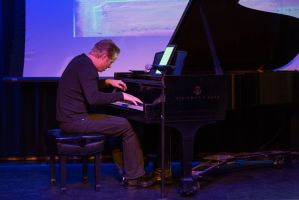 Anyone in the KVR Community who is creating presets, or designing sounds could have learned something from the people on the Sound Design for Synthesizers and Samplers panel. The panel included some of the best in the business; including Berklee grads Jack Hotop (who has done extensive work with Korg and Spectrasonics), Scott Tibbs (Berklee grad, who has spent his career at Roland), and Daniel Fisher (Berklee grad - Kurzweil and Sweetwater) and Ashville homegrown Amos Gaynes (from Moog Music). These guys really know the ins and outs of creating sounds, both for analog and digital hardware, as well as software instruments. They discussed their respective approaches to creating new sounds, and offered a number of tips.

For the people interested in modular instruments, there was a panel that featured the aforementioned Dave Smith, and also included another Berklee graduate David Rosenthal, who has gone through almost the entire history of commercial hardware synthesizers from every major manufacturer all by himself. He showed several pictures of his changing performance rig over the years, and shared some war stories about touring with them. More on David in a forthcoming post.

Afterwards, Dave Smith had this to say, "I had a great time. It's fun not only to meet up with many old friends, but it's a perfect environment to meet new people. Good music, good talks, and, of course, the best part was to properly recognize David Mash for his many years and contributions, to not only Berklee and its students, but also to the industry at large." 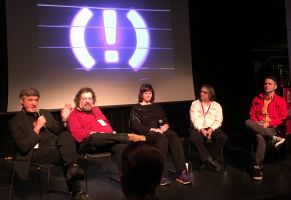 There was even a panel hosted by artist/inventor Moldover, that explored new alternative controllers, and featured musician/rocket scientist (really!) Kelly Snook, one of the developers of the Mi.Mu glove, as used by Imogen Heap, Joe Paradiso, from the MIT Media Lab, and industry veteran Paul Lehrman, whose day job is Director of Music Engineering at Tufts University. Each participant presented their take on the subject, and each presentation was remarkably unlike any other in the group. Cool stuff. 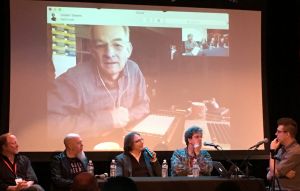 One of my favorites was the Multidimensional Polyphonic Expression (MPE) panel that discussed developments with the proposed MIDI specification for MPE controllers, and software that are currently making use of this more expressive control, the implications for manufacturers and developers, and possible new directions.

The panelists Athan Billias (Director of Strategic Product planning at Yamaha Corporation of America, and a member of the executive board of the MIDI Manufacturers Association), Geoffrey Gee (Composer and Sound Designer for Kurzweil and Roli), Progressive Rock star and product designer Jordan Rudess, and MPE spec participant Pat Scandalis. On the video feed from his living room in Berkeley (the other place) was Roger Linn, who was able to effectively demonstrate what the panel were discussing using his Linnstrument.

MPE is standardized on existing MIDI messages, so it's not a big stretch. MPE instruments remove the focus from traditional on/off switch MIDI controller keyboards, allowing the user to add more expressiveness. For example, using an expressive patch with an MPE enabled keyboard (like a Linnstrument, Roli Seaboard, or Hakan Continum) your fingers create the vibrato, rather than an LFO. It can't help but be more human when not locked to the tempo. All this will require adjustments in technique, and we are already seeing a new type of musical virtuosity arising from the use of this new standard. Here is a video example of that expressiveness from Turkish keyboardist Eren Başbuğ performing on the Roli Seaboard

Your humble narrator participated in the Developments and Directions in Software Instruments Panel along with Ernst Nathorst Boost (Founder/CEO of Propellerhead), Mark Ethier (Founder/CEO of Izotope), and Mate Galic (President of Native Instruments). The panel was moderated by Berklee's Richard Boulanger. One important trend that was discussed was the interest in Physical Modeling, which can take special advantage of the aforementioned MPE standard for expanding expressivity. To get the same expressivity with more traditional sample based instruments would be close to impossible. 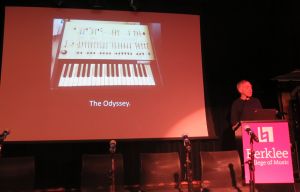 There were three keynote addresses. The first was from David Friend (co-founder of ARP) who talked about the history of ARP, and the interaction between the instruments' designers, and the artists that used them. He was especially animated when he described his experiences with Stevie Wonder.

The second keynote was given by Daniel Haver (CEO of Native Instruments) who talked about the company's history and plans moving forward. His primary theme was about bringing complete solutions to customers and being aware of the simplicity of the presentation, so that their software can be enjoyed by users of all types, from beginner to professional. 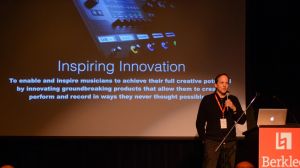 Finally, founder of Line6, Marcus Ryle, talked about innovation (he has a long history of it), and his requirements when thinking about what product to make (1. Is there a need for this? 2. Don't stray to far from the customers existing way of doing things. 3. Delight - Give the customer something to tell his friends about). He had clearly thought about what he was communicating, and, like so many of the presenters, he is someone to listen to carefully on the subject of innovation.

Marcus had this to say: "I truly enjoyed the opportunity to participate in Berklee College of Music's Voltage Connect Conference. The environment provided for many inspiring presentations and performances from technologists and artists alike, with a shared desire to ever expand the sonic landscape that drives our collective art."

Friday evening featured a solo Buchla/iPad performance by electronic music pioneer, Suzanne Ciani, and virtuoso keyboardist and composer, Jordan Rudess, who performed solo, and with his protégé Turkish keyboardist the aforementioned Eren Basbug. Between these two was a performance of the music of Dave Mash by Berklee faculty, and a couple of members of David's original band, Ictis.

The driver of the event was Michael Bierylo, who is currently the Chairman of the Electronic Production and Design Division of Berklee. At the end of the event he had this to say:

"We had about 250 people attending Voltage Connect on March 10 and 11. The response we've gotten from everyone has been overwhelmingly positive. Our students really appreciated the range of different offerings, and often had a hard time deciding on what event to attend.

Our goal for the conference was to offer people from industry, from academia, and artists, the opportunity to come together at a single conference event, and we were really pleased that this resonated with both attendees and presenters. Given the success of this first event, we plan on hosting the conference on a regular basis, and look forward to another Voltage Connect next year around the same time."

Berklee will be posting links to some of the event videos over the next few months. To start things off here's an edit of Jordan Rudess' performance

Finally, it wouldn't be right not to end with a quote from David Mash himself, who said: 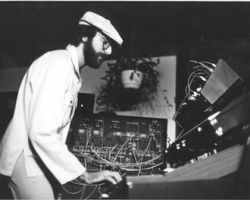 "Voltage was a wonderful experience for me personally. To see all my friends and colleagues there supporting a Berklee endeavor that has meant so much to me throughout my career was really satisfying. Though I am retiring, I expect to see all these great people at many more events in the coming years."

Here's a podcast of David talking about his career.

We'll be at the next one whenever and wherever it happens....