Frankfurt Musikmesse 2013 - Where have all the software companies gone...?

Vogelperspektive of the
Frankfurt Musikmesse

The governing body of the Musikmesse announced that 2013 closed its doors with an increase in visitor numbers. Altogether, 1,384 (In 2012 there were 1,504) exhibitors from 51 nations presented their products and services to 70,863 visitors (In 2012 there were 68,587). Compared to the previous year, this represents growth of 3.3% on the visitor side.

"The increase in the number of visitors (to the Messe) with an active interest in music making cannot hide the fact that the sector itself, and the retail side in particular, is struggling against the forces of consolidation and stagnation. The number of trade exhibitors and the quantities ordered have not risen", says Detlef Braun, Member of the Executive Board of Messe Frankfurt GmbH.

It's a good thing when trade organizations are honest, and his words are especially true in the software and electronic device segment of music retail. One of the most interesting developments this year was that a large area that formerly held booths from various piano manufacturers and new companies (think Hall E at NAMM) had been separated by a large curtain and converted into a children's music play space. The exception was the DJ hardware area which is getting larger and louder.

Two primarily software companies whose presence has not shrunk were Cakewalk and Steinberg. Clearly it helps to be owned by large musical instrument manufacturers with strong commitments to the music retail channel. 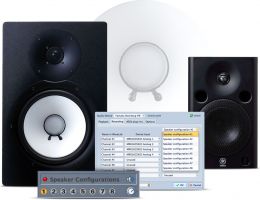 Cakewalk has been stretching into new territory for them with plug-ins like the CA-2A T-Type Leveling Amplifier ($99), which they were demonstrating along with the most recent release of Sonar.

Another software company does hardware... 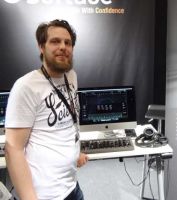 Niklas Oldham with
the Console1

Continuing the trend of software companies releasing new hardware was Softube was demonstrating their new Console 1. Console 1 allows the user perform an entire mix with a modeled mixer channel, controlled by physical knobs and buttons on hardware. The system can be used in conjunction with any major DAW host and the software can be inserted on any or all channels of the mix. Bundled with the Console 1 system will be the new UK 4k for Console 1 model of a well-known large-frame British mixing console, along with a few additions. The channel consists of several sections, including the original's equalizer and compressor, modeled mixing console saturation and Softube's unique Dynamic Shape—a combined expander/gate and transient shaper. It's a nifty solution that we will be checking out as it gets closer to the Summer ship date. 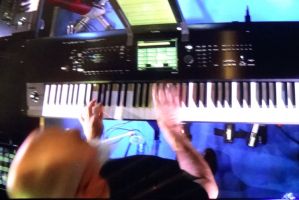 Korg has introduced three new Mini Analog synths called the Volca Series. These were cool, but the really cool thing was Jordan Rudess performing Tarkus in their performance booth. Jordan released this homage to ELP's landmark recording on his Road Home CD in 2007, but seeing it performed live was a nice musical experience.

The Volca Series is designed as a set of EDM production tools and consists of three models: the Volca Keys lead synthesizer, the Volca Bass synthesizer, and the Volca Beats rhythm machine. They will ship in July and for $149 each how can you go wrong...

The next mission to the Moon...

Universal Audio was demonstrating the latest in their Apollo family. Whereas the first Apollo was a "Swiss Army knife" for I/O the new Apollo 16 ($3,499 - shipping in May) is designed as a pro-level product for studios that already have preamps installed, but need additional (16x16 analog) I/O. It will ship in Q2 (that's pretty soon folks). It ships with the built in Quad DSP, and like the standard Apollo, ships with the Analog Classics plug-in bundle. The new UA Control software with Multi-Unit support for Apollo and Apollo 16 is coming early in May.

Continuing to introduce new hardware products, Arturia was demonstrating their new hybrid keyboards. The Keylab 25, 49, and 61 are a 25, 49, and 61-note MIDI keyboards (Prices TBA) with velocity and aftertouch-sensitive keys. They look great, play well, and come bundled with thousands of synthesizer presets from Arturia's TAE collection. Arturia has also just released the iMini app ($9.99) for iPad. A portion of the proceeds from the app will go to the Bob Moog Foundation showing that the company has their heart in the right place.

Toronto, Canada-based WaveDNA was demonstrating the Liquid Rhythm Groove Transformation Lab ($199). It's their second trade show (January NAMM was first) and it's great to see a newcomer. They have an interesting take on the adding grooves to tunes using traditional beat groupings shown on a graphic wheel. Hard to explain, but it makes sense when you see it. If you had no idea what you were doing with your beats this will teach you. 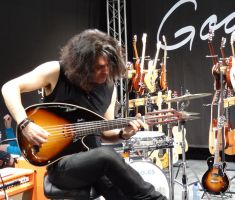 Alex Skolnik plays an
Inuk in the Godin booth

Guitar is not the first place one goes to see innovative products, but given that less was going on in the software area I spent a bit more time in the Guitar Hall.

Godin is a Canadian company (in business for 41 years) that is fearless in their approach to new kinds of instruments. Not just in their various MIDI guitars, but also with unusual designs. The Inuk Ambiance Steel ($1,595) is an electro-acoustic, 11-string, fretted instrument featuring silk & steel strings tuned in unison. It's standard tuning is the same as a guitar. The low E-string is not doubled making it easier to tune it down to D, or whatever. 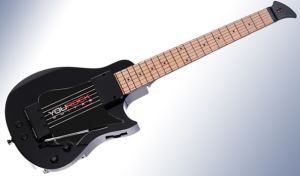 The You Rock guitar

The You Rock guitar is a different perspective on avoiding the latency inherent to any kind of pitch-to-MIDI conversion. It feels a little cheap in your hands, but of course that's because it is ($259). Some say it is a little glitchy, but I didn't notice it so much at the show. If you can get past the product's name, and don't expect to record screaming solos with it (no strings to bend) it could be a great MIDI entry device for composers and songwriters.

It wouldn't right to have a trade show report without a mention of Avid. Avid is in the midst of a major transition from one management team to another, and from a company that could dictate it's own terms to a less level playing field. They were showing Pro Tools 11. The major changes are under the hood as it will be 64-Bit native with a completely new audio engine when it ships some time in Q2. Make sure to check the AAX Compatibility Page for your favorite plug-in before upgrading. Understandably the new version will no longer support non-AAX plug-ins, but they say that files can easily be interchanged between previous versions. They were also demonstrating the Eleven Rack, which made the happy owner of one glad...

Showing dedicated commitment to their customers u-he was there in force demonstrating all their products, but especially Satin, their new tape emulation plug-in, except that it isn't actually modeled on a vintage tape machine. They call it a tape construction kit. If it's anything like their other products it will definitely be worth checking out. Now if only I could find some information about it on the u-he website... 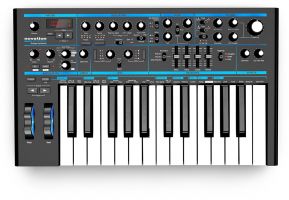 Novation created a splash with their new Bass Station II ($629). Bass Station II is an analogue mono-synth designed to incorporate the best elements of the original Bass Station into a brand new design with re-worked modulation, effects, filters and bigger sound. The signal path is pure analog - including the effects section. It comes with 64 factory presets and space for 64 of the user's own sounds on the hardware, more can be stored on a computer. It ships in June. Now we know why they re-released the bass station plug-in a few months ago. They were also demonstrating the free LaunchPad app for iPad.

Despite the gloomy numbers for software developers these shows really are fun to go to, if you like new gear. Since MusikMesse has consumer days (unlike Winter NAMM) it is possible to go without being a member and worth doing. In the meantime, support your local music dealer....