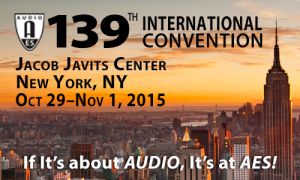 The 139th Audio Engineering Society Convention (AES) was held October 29-November 1st at the Javits Center in New York City. Speaking as one who grew up in NYC I can say with conviction that it was an especially cool time to be there. It was Halloween with the usual madness, especially in the East Village. The local baseball team (New York Mets) were playing in the World Series, which is kind of like watching Germany in the World Cup while you're in Berlin. Finally, AES was sharing the Javitts Center with the registration site for the NYC Marathon, in which 50,000 people participate. There was no shortage of crowds.

And then there was the show itself and chance to see new things and old friends. AES is an Exhibitor Show, but it's also a technology show where audio nerds present their research on various subjects related to audio. For example there was a track on the latest in Game Audio for developers who want to keep pace with the latest trends and technologies. Presentations included VR Game Audio: The Importance of Sound Propagation and Reinventing the Sound for Call of Duty: Advanced Warfare.

It's no secret that AES has become a smaller show. However this year registration was near 18,500, with All Access and Exhibits-Plus registrations at an all-time high, so the latest trend is a positive one. But, while big format studios are becoming more scarce (as more work is done in home studios and with laptops), the the need for large format live technologies is growing, and was a focus of many exhibitors and attendees at the show.

The high-end audio sector comprises a smaller number of participants, but they work on deadlines every day and the products they use are mission critical. They need their stuff to do the right things, do them well, and behave reliably. If those criteria are met they'll pay whatever it costs and be loyal customers for life.

It's also no secret that networked audio, both analog and digital is now ubiquitous. The ability to easily route audio anywhere is critical in not only large and smaller format studios, but also to live sound installations.

Avid had a large presence of course. They are focusing on their "Avid Everywhere" initiative, and part of that strategy is to promote their connectivity partners at shows like AES. In addition to to hosting the pavilion Avid had several product announcements. Among other things they were showing the latest update for Pro Tools, Pro Tools 12.3. With purchase of the upgrade, users will also receive a full year of future updates. Do it soon because the subscription price is going up.

They were also showing the Avid Pro Tools Dock Station (Available Q1 2016 - $1199). It's designed to be an affordable and portable control surface that works with an iPad running the free Pro Tools | Control app. A user can also use it with a whole bunch of EUCON-enabled DAWs and video editing tools.

In the Avid Pavilion MOTU was showing their AVB audio networking (using the open AVB standard) compatibility with the Avid S3 system. They also had their new MicroBook Iic ($249) for the mobile among you.

Also in the pavilion was NUGEN Audio was showing the SEQ-S ($249) full-surround sonic sculpting and matching EQ plug-in that has a new filter morphing feature that allows fluid morphing between two sets of filter curves under full user control, and the new SEQ-ST ($99), a stereo-only version of SEQ-S. NUGEN believes it will be useful for creative effects and controlled scene transitions, and could have applications within the music, film, and post-production environments.

And sharing space in the pavilion was Plugin-Alliance. They are very excited about their new Brainworx_bx-console ($299) that emulates the Neve VXS console. The specific Neve VXS console emulated has a history involving recording orchestras for films during its time at Skywalker Ranch in Marin County California, making hit records during its time in Sweden in an ex-Abba member owned studio, and now, serving as the centerpiece of the Brainworx studio, where it has been used in the development of many of the company's most popular plugins.

A competing AVB standard, Dante is a proprietary protocol that requires licensing payments to Audinate. The folks at Dante jumped on AVB early have been working hard to standardize their implementation, which can save developers of AVB products time to market. Focusrite who adopted the Audinate Dante network back in 2011 with their now fast growing RedNet series has announced RedNet AM2 (Available Q2 2016 - Price TBD), a stereo monitoring box. Dante-based products can be found all the through the audio stream from microphones to speakers.

Millennia makes some of the best analog gear on the market, so their new DA-296 G­­ōzowta ($450) converts from Dante audio over Ethernet to high-resolution analog at sample rates up to 96kHz could be an important product for Dante systems. The G­­ōzowta connects any two channels of Dante to analog gear, including power amps, stage monitor systems, and powered speakers. Outputs include balanced XLR and Phoenix-style output connectors. Power is supplied by the Ethernet cable from PoE (power over Ethernet) enabled switches or in-line PoE injectors. 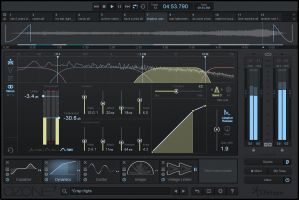 iZotope was showing the new version of Ozone 7 ($499), their set of mastering tools. The new version has improved Dynamic EQ: The Dynamic EQ introduced in Ozone 6 Advanced has been updated with two extra nodes, usability improvements, and CPU optimization. It also features the new IRC IV for more transparent mixes than ever before with less pumping at higher volumes and bringing the creative color and nostalgic tone of analog hardware to your digital recording with a Vintage Limiter, plus the Vintage Tape, Vintage EQ, and Vintage Compressor modules in Ozone 7 Advanced.

Our good friends from Paris, UVI were showing Falcon ($349), a hybrid instrument with features designed for DIY musicians and sound designers. With 15 oscillators covering both synthesis and sampling techniques, 80 effects, extensive modulation control, Falcon is designed to provide a sophisticated set of tools for sound and instrument designers. Parameters can be mapped as macros and controlled by MIDI, OSC or host automation and even arranged as custom control panels through a built-in visual editor. Custom script processors can be created to generate or modify MIDI data or even design fully-skinned instruments with the Lua language.

SoundToys was showing SoundToys 5 ($499), a major update for them. It takes on the form of an effects rack that will load all of their plug-ins, which takes up less CPU time than loading them individually. It includes their entire range (18 in all) of audio effects in one collection. SoundToys has been making interesting off-center effects plug-ins for a bunch of years now, so they're proven in the marketplace. If you haven't tried them...

In the Line 6 booth founder Marcus Ryle himself was showing off the new Helix ($1499) guitar pedal board, a product he is particularly proud of. Line 6 was the first company to make modeling musical instrument products like this, and Helix is the latest generation of their technology. It's a large product and it's a premium price point, but that's not going to stop people, because it sounds amazing, and has the usual Line 6 attention to detail in its user interface design and functionality. 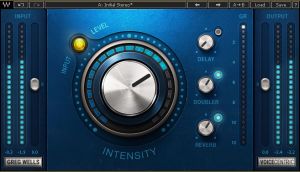 In addition to three new plug-ins Waves was showing DigiGrid products the latest fruits of their relationship with DiGiCo (co-owner of DigiGrid). The new plug-ins on display were an updated version of their softsynth, Element 2.0 (Price TBD), the Greg Wells (Adele, Katy Perry, OneRepublic, Mika) VoiceCentric ($99), and the eMo D5 Dynamics ($299) plugin.

Also in their own booth, SoundToys were showing SoundToys 5 ($499), a major update for them. It takes on the form of an effects rack that will load all of their plug-ins, which takes up less CPU time than loading them individually. It includes their entire range (18 in all) of audio effects in one collection. SoundToys has been making interesting off-center effects plug-ins for a bunch of years now, so they're proven in the marketplace. If you haven't tried them... 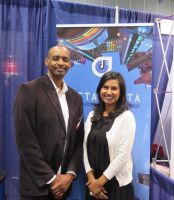 Industry veteran Ray Williams and Nadia Adam were manning the IMSTA Booth. Based in Toronto IMSTA is a nonprofit association which represents the interests of the music software industry. They promote the category and try to make people aware of the damage that software piracy causes to the industry. There are some interesting things happening with NAMM, IMSTA, and KVR that we believe will benefit developers (and customers) of software products. More on that soon...

Eventide was showing Anthology X ($699), which promises 40 years of Eventide experience bundled together in the form of 15 different plug-ins. Each plug-in has been re-designed from the ground up to precisely mimic the sound of various Eventide designed hardware devices, including the H2000, etc. That's a lot of innovation in one package, and believe it or not, a bargain at $699.

API was showing the latest addition to the 500-Series module line: the 535-LA ($595) line amplifier/ driver module, which is already built in to their The Box hardware mixer. It's modeled after API's console based 325 booster cards. The 535 can both amplify and attenuate incoming and outgoing signals while providing the trademark API warmth and tone. The 535 can also add warmth to digital signals such as DAW outputs, and features an LED clip indicator.

So what does AES mean for plug-in developers. The answer is, it depends. Repeating what was said earlier: The high-end audio sector comprises a smaller number of participants, but they work on deadlines every day and the products they use are mission critical. They need their stuff to do the right things, do them well, and behave reliably. If those criteria are met they'll pay whatever it costs and be loyal customers for life.

Find Cubase Pro and H3000 Factory in the KVR Marketplace