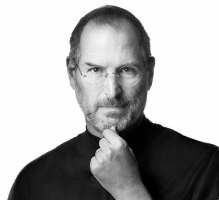 The Apple website says: "Steve's brilliance, passion and energy were the source of countless innovations that enrich and improve all of our lives. The world is immeasurably better because of Steve."

This may be an understatement.

It's well documented that Jobs was a techno hero whose influence has impacted many different industries: Computers (of course), telecommunications, consumer electronics, computer animation, and software distribution. The list goes on, but then there's music making, music listening, music marketing and music distribution. Think of the difference that his contributions have made to what we do everyday with computers. The fact is that Steve Jobs appears as the principal inventor or as one inventor among several on 313 Apple patents is quite amazing. Most music software developers were originally attracted to the Mac because they could remove the some of "computerness" from the solution.

I was fortunate enough to meet Steve Jobs a few times, but the first meeting was the most memorable. Steve was running NeXT at the time. Opcode had released Studio Vision and Steve wanted us to port it to the NeXT platform because having a music making application was important to him. Our engineering team looked into the issues and decided that the task of moving a real time program like Studio Vision to a Unix OS like NeXTSTEP was a huge undertaking. There wasn't much of an installed base, so it just didn't make business sense.

Rob Poor, who was NeXT's music advocate (and later ran R&D for Opcode) persisted and asked if we would consider taking a meeting with Steve. It was easy to say 'yes' to that because we were fans of Steve Jobs' Apple (as opposed to what it was without him) so we met with him over lunch one day. Dave Oppenheim and myself alone with one of the greatest salesmen the world has ever known. He was animated, confident, and absolutely convinced that not only was the task going to be much easier than we thought, but that we would sell tons of them. He even offered some GUI ideas. We left the meeting absolutely convinced that we had to do whatever it took to make it happen. Reality reared its ugly head again a few days later, but the fact that he had so skillfully changed our perceptions has remained with me ever since.

I suspect that this is the kind of inspiration that he provided all the time to the people that worked directly for him and one of the things that set him apart from other technology visionaries. It is not just about having an idea. What it takes to make the idea a reality is of equal, but often under looked importance.

Our thoughts are with his family.