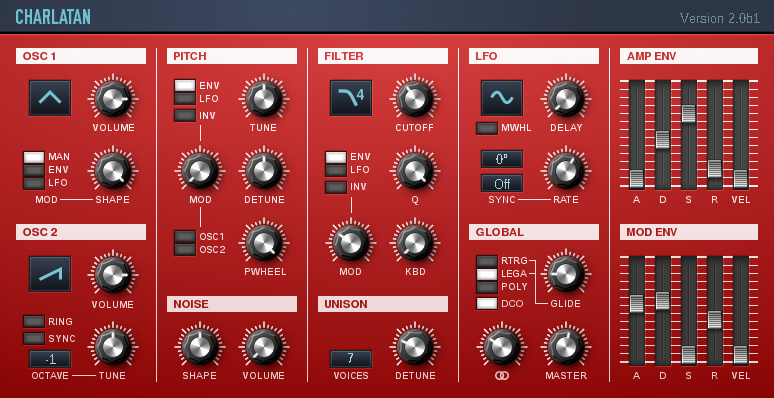 Charlatan is a polyphonic, subtractive virtual analog (VA) synthesizer plugin with focus on sound quality and easy usability. It comes with a flexible, yet not overwhelming feature set which encourages artists to start tweaking instead of just relying on presets. Inspite of it's simplicity, Charlatan's architecture is flexible enough to create both classic sounds and rather experimental noises. While making no compromise about sound quality, the sound engine has been highly optimized for efficient CPU usage making Charlatan well suited as a "bread and butter" synth even in projects with a large number of plugin instances.

Best of all, it's FREEWARE! Enjoy!

Kind of amazed you've slashed the CPU by so much, already very light...

Glad to see Charlatan is still growin!
this boy is already a heavy hitter in the bass area
cant wait to hear what id does in unison!
awesome

I just want to say thanks to you!
I like Charlatan's OSC and Filter.
Now Charlatan definitely addicts the SuperSaw freaks.
I will add to my new project and see if it has bugs or not.
soundcloud.com/yudaidhun
Top

P.S. the GUI looks marvelous! i'm not even gonna mess with it!

Why i still buying commercial stuff when i can get something like that for free? Thank you!

Whoever wants music instead of noise, joy instead of pleasure, soul instead of gold, creative work instead of business, passion instead of foolery, finds no home in this trivial world of ours.
Top

Would it be possible to rename Charlatan internally (for example to Charlatan2) so that both the old and the new version could be used?

It seems that some quite nice 1.4 sounds don't work (no sound at all) and I guess I'm not quite competent enough to recreate them. I'd like to have the new one, too, because there will surely be a lot of soundbanks for the new version; I'd like to have both working.

However, if there is a lot of work to achieve this kind of solution, forget it; I understand this is a problem only for us beginners.

You do not have the required permissions to view the files attached to this post.
Top

Never thought I'd be a Charlatan

So awesome, thanks for this!
Bedroom Producers Blog << Free VST Plugins!
Top

Thanks a lot!
When I relaunch my website, I'll update my bank for Charlatan and take advantage of the unison.
ghostwaveaudio.com | soundsets for Synplant, Sylenth1, Diva and more
Top

And they all look the same, must look confusing on the screen