One Synth Challenge #136: Odin 2 by The Wave Warden (Voting Started!)

TheWaveWarden wrote: ↑
Thu Jun 18, 2020 9:11 am
You could try to draw them: Photonic very faithfully recreated a cello patch by redrawing the waveforms from a cello sample in the WaveDraw Oscillator. I can hardly imagine that being illegal, but I'm not a judge.

I would like to look into this issue. I really like the idea of drawing waves in Wavedraw and Specdraw oscillators! I think that this "method" will not bring hyperrealistic results, but will be a good starting point for further work with sound. And, although this is technically not against the rules, I would like to find out more about the attitude of the community and administrators to this approach this month, before going deeper into its implementation.

There are currently no options in Odin 2 for import of samples or wavetables, so no grey areas for the rules. Anything you can do in the synth with any of its modules is allowed.
Try for example drawing in the Wavedraw and Specdraw oscillators, then using these waveforms in the VectorOsc, its like a multi-dimensional wavetable with x-y for control. You can even use the waveforms for LFO shape!
http://www.richardsemper.com/
One Synth Challenge - https://sites.google.com/site/kvrosc/about
Top

Thank you Photonic and RichardSemper for the answers!

I will experiment with these methods again...
Top

Here comes my entry. It is an imaginary soundtrack to a short film about Asgard, the home world of Odin. As you see, this time it is not just one single song as usual. I had so many ideas and sounds, so I decided to devide the track in 4 movements.

Movement 1 - Crossing Bifröst
Bifröst is the rainbow bridge from Midgard (which stands for our Earth) to Asgard. You have to cross it to get to Asgard.

Movement 2 - The twelve Palaces
Asgard is surrounded by an impregnable wall. Inside there are the twelve palaces, where all the gods live.

Movement 3 - Memory of the Fallen
In this world of gods, they can die. So there are always some to grieve for.

Movement 4 - The War Horns
You don't want to hear that sound. Because it means that the battle is about to begin!

Odin2 is really a big monster synth. Endless potential! Thanx so much for this great instrument to The WaveWarden

The only problem I had was the CPU hunger, especially with unison. So I made the sound design with a certain unison value, but during composing and arranging I turned all unison down to 1. Nevertheless I often had some mutes and crackles when too many notes are playing at the same time. But those mutes were not allways at the same point and at any time I played the track. I think the PC was not allways too busy to handle the data.
When the arrangement of the movments were done, I set all unison to the desired values and I froze all single tracks. This gave me perfect wave files for each instrument, easy to mix afterwards.

Lean back, close your eyes and enjoy the film

Oh my Odin, I'm crying from my helplessness in the face of power of this amazing track! Oh, those brilliant sounds! If it's not a secret, at least hint at the basic principles of creating a piano sound from the first part, I just don't have any ideas on this!

Also, thanks for the hint on working with unison sounds, most of my sounds use 4-6 detuned voices, and the same crackle and "drop out the sound engine" every 5 minutes... Well, it looks like my eight-year-old laptop is getting old for modern synthesizers, or Cakewalk is heavier than FL Studio.

IV! wrote: ↑
Wed Jun 24, 2020 6:38 am
Oh my Odin, I'm crying from my helplessness in the face of power of this amazing track! Oh, those brilliant sounds! If it's not a secret, at least hint at the basic principles of creating a piano sound from the first part, I just don't have any ideas on this!

Yeah, I can help you! TheWaveWarden told us not to spread our presets on the web, before Odin2 came out officially. But I can give you a screenshot of this sound and some hints! 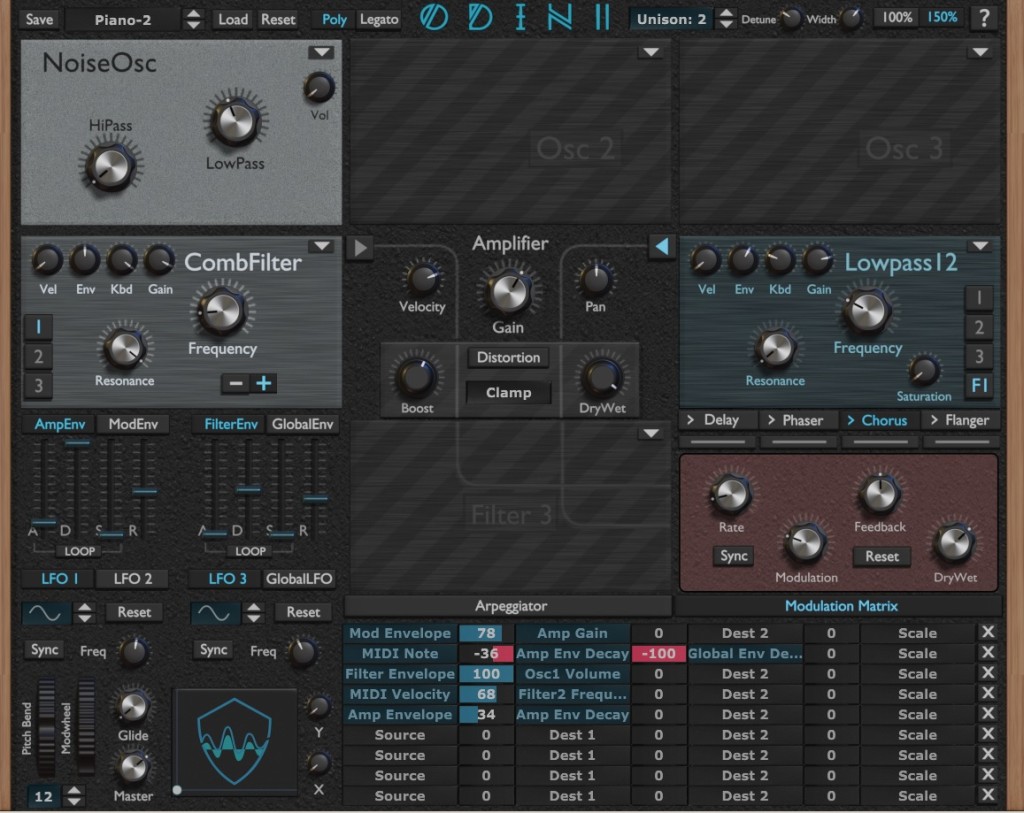 As you can see in the image, no VCO with a waveform is in use. Just noise! And this is fed into the CombFilter with full resonance and full Kbd. With the filter ENV I controll the volume of the noise. A short decay sound creates the piano sound in the CombFilter. But this is very harsh and need some filtering in filter 2. It is a kind of physical modelling. A lot of fine tuning is necessary to make the sound good. You need to finetune the Frequency knob of the CombFilter to tune the pitch of the sound so, that it fits to other instruments. Unison 2 brings a bit of stereo to the sound, makes it more realistic.

Wavewarden did give out some presets somewhere on kvr. It included photonics presets which were the best of the bunch. When I first saw this preset, with only a noise source, I thought you were just trying to show off. But it works.
https://soundcloud.com/infinitetelemachy
Top

This... this is genius! I've been getting some presets in non-standard ways, but I would never have thought of this! Oh, I'm not good at it at all... Just thank you!

By the way, Yes, I have these "extra" presets, including Eauson's unusual percussion sounds and Photonic's wonderful instruments. DistGuit (MW, AT) is generally the best electric guitar I've ever heard from VST (without samples)!
Top

Look up Karplus-strong and how you simulate plucked sounds often using white noise as the exciter ...

And for tuning ... use e.g. Reatune in Reaper to get it just right - watch the cents as well to get it nice and accurate ... easy peasy ... this method of creating instruments using a comb filter can work very well (depends how good the comb filter is though ... ODIN 2's does work quite well!)

With T force trance gate on this synth I get bad clicking. If instead I use A1 trigger and slow the attack and release its better but I can still barely hear it in one section (On bose headphones I can. Sounds fine on car speakers). Do some synths just react badly with trance gates? Is there a way to completely get rid of the clicking other than making the attack and release so slow it's not hardly a trance gate anymore?
https://soundcloud.com/infinitetelemachy
Top

Odin2 is a realy big moster synth. Endless potential! Thanx so much for this great instrument to The WaveWarden

@WaveWarden - Logic Pro AU version isn't recording in XY automation. Is this a known issue? i didn't have issue automating other stuff...
Soundcloud | Spotify | YouTube Tutorials
"Just sidechain everything to everything"
Top

for that matter it looks like latching in any automation by hand doesn't work in Logic Pro X with AU.
Soundcloud | Spotify | YouTube Tutorials
"Just sidechain everything to everything"
Top

"Novodevichy Convent (Life Before the Testimony)" by Identikit

@The Wave Warden
Thanks! I will do my best