Midi vibraphone are extensive, there only used to be the MalletKat, but now at half the price for 3 octaves there is the MalletStation $999. Way out of my price range.

I've wondered about the idea of getting DIY kit midi trigger circuit that you add Peizos too. Just been rummaging around the Aruino site, but I haven't a clue what I'm looking for.

Then is dawned o me that I hve a Korg NanKey that only half the keys work on, becuase a variety of ants here discovered the contact rubber was tasty (I joke not, I am in central Vietnam and Ants have caused me lots of expenses, they've even nibbled the contact rods in my WX5 Midi sax).

There's 3 parts to this post:
1. Can I get 3 octave midi brain than I can wire peizos to?

2. Do you think I should just use the brain in the Nanokey, which is already USB ready, and use peizoswith wired into it? Also can I wire two peizo in series of one key?
https://www.thomann.de/pics/bdb/441513/13594146_800.jpg
3. So in my ideal vibraphone there would be two enginesin one. The keys make contact across two supports, so I can have a peizo on both. Creating a more stable tone if I don't strike the middle on te key (hence mye peizos in series question point 2). But I've also thought this could add to the expressiveness. If one end of the key was routed to one midi brain, and the other end to another, I could have two tones from one key, an velocity will change the balance. I've also wondered if with some clever midi trickery, if I could have both on ethe same mide channel but the differences in velocity generate CC1 or CC11

Having just had the Frankenstein's NanoKey idea, I could test it with a build using pairs of piezos, and if it worked, then separate the peizo pairs and buy a second nanokey to butcher, for the second brain.
Top

1&2 ... Piezos generate a voltage, they're not switches. Not sure many off-the-shelf brains are expecting that, most are probably expecting switches. So whatever electronics you have, they're going to have to make that voltage behave like the switch/whatever it is that it expects.

3. I suspect that you're just going to get 2 piezos giving you the exact same output. Ive seen piezos used to record ants footsteps, so either one will be sensitive enough to pick up no matter where you strike, but the amplitude wont necessarily be different enough to tell them apart.
"The bearer of this signature is a genuine and authorised pope."
Top

1 and 2. I thought he increased voltage from the increased pressure is used for velocity. I used to have an Alesis DM5, and it took the the output of peizo rum pads to create midi data with velocity. I thought some of the DIY brains allowd this. The korg nanoKey is veloity sensitive, would it be the same procress. SO if I removed its key triggers and replaced with piezos, would it not be the same velocity set up as before (with some callibration of the peizo outs to match the previous keyboards triggers output)

3. If peizo create increaed voltage with incresed pressure, and a peizo t either end of a beam, then striking one end would surely create a greater voltage than the other?
Top

Oh, it certainly can be, but I suspect that's different from how most basic keyboard oriented brains work, where the velocity comes from actual keytravel velocity between more than one switch. That can be done entirely digitally, whereas to track voltages you need an analogue-to-digital convertor.


I thought some of the DIY brains allowd this.

Some probably do, I suspect most dont.


The korg nanoKey is veloity sensitive, would it be the same procress. SO if I removed its key triggers and replaced with piezos, would it not be the same velocity set up as before (with some callibration of the peizo outs to match the previous keyboards triggers output)


Thinking about it, Im probably wrong about the nanoKey, it might be using force-sensitive resistors. But the 'mechanism' of the key would be a change in resistance, not voltage, so its not a direct part swap.


3. If peizo create increaed voltage with incresed pressure, and a peizo t either end of a beam, then striking one end would surely create a greater voltage than the other?

Im saying that the difference might be negligible for any practical use.
"The bearer of this signature is a genuine and authorised pope."
Top

Thanks' I appreciate the insight.

So if I used force-sensitice resisters, could I get this idea off the ground using the nanoKey brain. If I opened it up and posted images can you tell easily?

Or am I going to battle betting the components right to even get a usable velocity range. Seems a shame to just dump the Nanokey, but also a shame to spend a lot of time making something that isn't used.

Here's an image off the net, but with two versions on the nanoKey I can't be 100% sure it the same as mine. 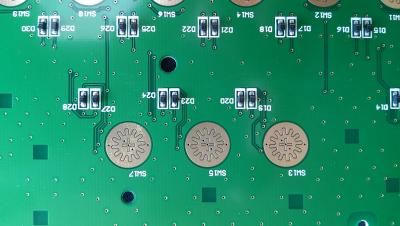 Hmmm, that picture is making me think that its actually not FSRs; Im thinking rubber membrane switch, ie something bridging the two concentric metal pads.
"The bearer of this signature is a genuine and authorised pope."
Top

That switch mechanism would make sense. As I mentioned in my first post, an ant variety took a liking to the taste of that rubber and ate away at some of them. SO I have lost half the keys (Korg don't sell the replacement). I never even got the chance to use it beyond testing it worked when I first bought it.

So if hey are just bridging, how is it velocity sensitive?
Top

You could probably use piezos to trigger transistors which could then act as switches across the metal pads. However, I'm not sure how you'd be able to control velocity this way.
youtube
Top

Piezos are pressure detectors with a very high impedance. The rubber keys are connections with a very low impedance. Velocity is still detected with the time needed two contacts move from open to close and vice versa...
You can probably create such a controller with piezos, but not with the „brain“ of a nanoKey. You should rather take an Arduino and program it to your needs...
The huge advantage is that you could space it better for playing vibraphone style with sticks...
Top
10 posts • Page 1 of 1

What are you listening to now? Look on my works, ye Mighty, and despair!by vurt @ 15:39 in Everything Else (Music related)