Did you know (Tips and Tricks) NO CHAT!

machinesworking wrote: ↑
Thu Mar 12, 2020 11:32 am
OK you're commenting like you've somehow gotten it to work outside of the video shown. Have you? or are you basing this off of perceived functionally? I've gotten this behavior to work exactly like shown in Xbitz's video, without using Alternative Copy, and only with Alt/Option dragging notes to duplicate like shown in the video.

Using the pencil tool does not replicate this behavior, it only makes notes in the clip you're currently in. Option/Alt dragging makes new notes in all copies of the clips you select. In fact Option/Alt dragging seems to be the only way, if you select without lassoing the note, it does not replicate across all clips. This is the behavior I see here.

This is just a fraction of required functionality. That's why I'm saying alias/linked clips are still needed. What's there might actually be a bug, because I can't understand why it even works for this isolated case.

Regarding pencil, I thought it was a general comment, not with regard to alias/linked clips. My bad.

OK that all makes sense, I read it like you had discovered a different way. At least we have a way that works for now though!
Top

Yeah like that. You don't even need nuance though to since you don't need to make an SFZ. You can also uses moss's tool to create multisamples from the raw samples that were frozen by freestyle.
System: Windows 10, Dell XPS 2-in-1, Bitwig 3, Steinberg UR44.
Top

I have another tip related to Freestyle: You can use the macros in Freestyle to send midi cc to other devices on the track. Similar to using the midi cc device in bitwig. But the cool thing with Freestyle is that you have really easy snapshot functionality, which can be recalled by program change. So using midi modulation on Bitwig device parameters, you can now have snapshots of those parameters. These could be triggered manually by program change, or other modulators controlling program change (like a macro), or embedded into a clip.

NewSonicArts also just made a modification where the macros get enabled when you give them a label, so you don't need to load devices inside it if you are using it for external device control. Very responsive developer!

So with the auto-sampling that can be used with Bitwig's sampler and the midi cc snapshots, I'd say it's probably the best tool a Bitwig user can get.
System: Windows 10, Dell XPS 2-in-1, Bitwig 3, Steinberg UR44.
Top

if u think Bitwig colors look like bit childish try with Midtones 10/Blacklevel 100 as in this series https://www.youtube.com/playlist?list=P ... xmKsVmiFt-

personally I like it much better
"Where we're workarounding, we don't NEED features." - powermat
Top

For continuous loops without having to mess with MIDI/note latch:

- Use the Sampler in Bitwig Grid, enable looping, and patch a Value module into its trigger input.


To make any instrument device drone without using MIDI:

- DC Offset into Replacer. I find the most convenient way to set it up is to put them in a Chain with a button to toggle the DC Offset from 0 to max, and save that as a preset.
★ starthief.bandcamp.com ★
Top

I was really lamenting the fact that Select was limited to two inputs, but realized this patch the other day. Much happier now!

Edit: Ah, ok I was just looking at this again, there is an issue with the signal from the Ø Counter. It is not quite strong enough to reach the fourth position on the switch for some reason. So we need to slightly offset it. To make this patch work properly, after Ø Counter patch a Bias or Ø Bend before select in, and slightly adjust the level upward until you see the last step being activated!
Top

the more I explore Arpeggiator in relation to the other devices and modulators Bitwig offers, the more I see it as a powerful tool for modifying the timing and probability of gate (or, in MIDI land, "note on") events.

for example, you can modulate Arpeggiator's global gate length with Steps to apply a pattern of "mutes" that can run at different clock speeds, lengths, or directions relative to the MIDI that's being fed in. I went into more detail about this in Bitwig Q&A here to explain how to use Steps + Arpeggiator to implement probabilistic gating of notes, like the Chance module in the Grid, but outside the Grid and applied to MIDI.

also, you can use Arpeggiator as a real-time quantizer (in terms of the timing grid) of MIDI. if you're sending Bitwig MIDI from a hardware sequencer and suffering from jitter, try putting Time Shift before (to the left of) Arpeggiator and decrease Time Shift by whatever minimum # of samples or milliseconds you need to safely capture the maximum latency of your MIDI sequencer's notes. this will add latency to your whole project, but it's worth it to me to be able to jam on a hardware sequencer and have Bitwig processing its MIDI data without jitter.
Top

- get instant audio from a high modulation signal by using the dc offset module, modulating the offset.

For silly tape stop effects
there is an automation of timeline-tempo just check inside master channel.

Deeper sidechaining: for extra pumping one can duplicate a compressor.
With the sidechain set to the kick, instead of lowering the threshold too much.

The modern just use a tool device, and ride the volume by a sidechain modulator.

-create a surfer eq by adding a keytrack modulator to that eq and send some midi to it.boosting or attenuating with one or two notches not with a static setting.this can help on super low subbass rides.
By using additional lfo or envelope you can create some talking bass if using more than two notches.

Don't forget you can use parallel processing not only with compression. Same works also for distortion, saturation, or even eq. Just group that effect and use about one half of the mix knob, 12 o'clock.
But if using serial processing, stacking up maybe 10 compressors, don't forget to put a peak limiter at the end of chain to not completly destroying your audio.

Make an imager module. Just create a new multiband fx, set inside the low lane the crossover about 150 Hz, put a tool device inside the low lane, add a compressor with a setting about 20% of gain reduction set the tool device one half to mono,
Set the crossover of the high band to about 5000 Hz, add a tool again and set the stereo width to 150%. You can drop a saturator or another waveshaper in the mid band for that extra meat.

Create a multiband transient designer that one is pretty obvious. By the attack you can boost or attenuate the sound which is front, by sustain the same goes for 'room sound' If you need for example a de-verb or a re-reverb in a decent region of any loop. Just do a little higher crossover setting above 500 Hz for more coherence in phase.

You can create a multiband sidechain ducking monster by using slightly different response curves on the dynamics device.

Don't forget to make several fadeout automations when working with reverb to have super transparent transistions inside a track.

For silly tape stop effects
there is an automation of timeline-tempo just check inside master channel.


Well I never knew there was automation of timeline-tempo, learn something every day!

track templates
https://www.youtube.com/watch?v=gehoyt7LGpg
a device container should be created and its filter path can be set as default filter path for new track creation(needs double-clicking under the already existing ones in the arranger to able to see it) ... that's all
"Where we're workarounding, we don't NEED features." - powermat
Top

I had no idea you could just drag a Midi Clip into a Sampler in another track and have the Midi Clip Instrument bounced in the sampler. That's sweet!

I got it from this guy on YouTube KrisTiasMusic.
Ableton

I'm pretty sure I read here about using a DC Offset device with an Audio Rate modulator to patch feedback loops. If not... well, you can do that

You can patch feedback in the Grid too, without a Long Delay module, if you use a Bias and a Modulator Out module attached to its knob. (Here I added an attenuator just for convenience, with the modulation depth for the Bias knob set to 2.0.) 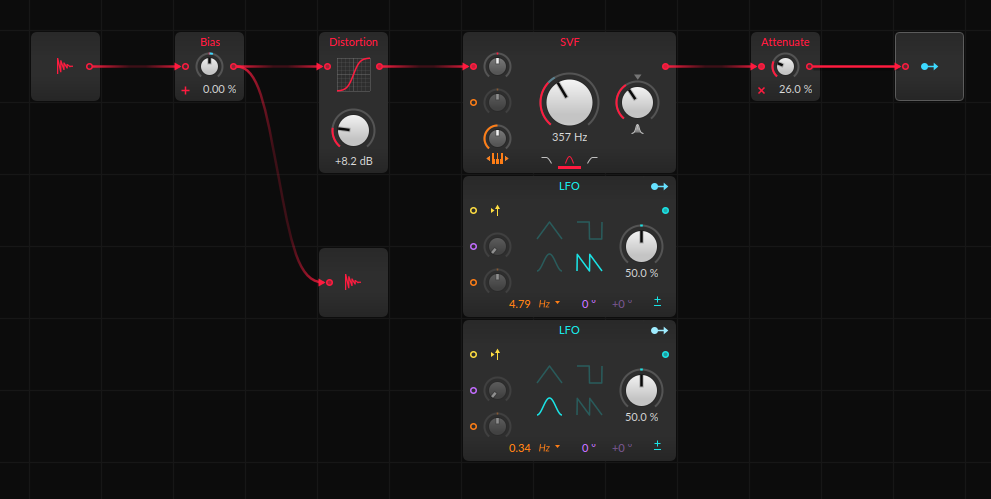 For sure it will introduce the same delay, but needs way less real estate, and if you need to send it to multiple places, it adds up without the need of a mixer. A bit like Max/MSP with hidden cables...
Top

how transposition map can be used to map scales to white keys only
https://www.youtube.com/watch?v=YV1iW3lXOrQ
found composing much easier (sry I'm not a composer) using fixed chord position patterns on every scale
1-3-5 basic chords, triads
5-1-3 triads in second inversion (don't have to count, there is two white key distance between the lowest and root note)
3-5-1 triads in the first inversion (don't have to count, there is one-two-one white key distance between the lowest keys and root note)
7-2-5 dominant chord (don't have to ...)
alter sus2 chord 3-6-1 (don't have to ...)
etc.
basically, a lot of triad variant can be recognized without any thinking on any position (scales can be changed with automation etc.), who need composer update anyway