Don’t know too much about these two Midi plugins but my feeling is that they will be fun to play with.
They can be had with the following Group Buy for $24.95. Kontakt is required.
viewtopic.php?f=43&t=535163

✗ Level 5 - 250
Midi Loop Effect
This will be based on something like a Midi Delay with different ways of affecting the Midi Throughput.
-
✗ Level 6 - 300
Midi EUC
Midi Based Euclidean Sequencer.

I never heard about this until recently but this is something i was searching for:

I just stumbled over the iOS app Velocity Keyboard and Velocity Filter (actually as bundle for just 10.99) which actually gives finally real velocity to even iPads without 3D touch. It works really good and with low latency. Almost better than some not so expensive midi keyboards and even on par with some better ones i used and indeed much better as 3D touch on my iPhone.
it is also customizable in so many ways and of course offers MPE and more.
Most expressive midi controller ever on a flat surface. This could replace finally my Seaboard Rise

I‘m only missing an option to set the scale degree of a fixed note...
Top

I‘m only missing an option to set the scale degree of a fixed note...

I've been loving this. The developer has been incredibly responsive to suggestions, and just about all of the features I've requested (such as selecting/editing multiple notes at once and autofill rows) have been implemented in the latest version.

I agree assigning a scale degree to the fixed note would be nice. The main feature addition I'm still hoping for is the ability to input your own custom scale.

I‘m only missing an option to set the scale degree of a fixed note...

I've been loving this. The developer has been incredibly responsive to suggestions, and just about all of the features I've requested (such as selecting/editing multiple notes at once and autofill rows) have been implemented in the latest version.

I agree assigning a scale degree to the fixed note would be nice. The main feature addition I'm still hoping for is the ability to input your own custom scale.

I've found that the free Ripchord plugin is a quick easy way to input custom 8 note chords into Phrasebox. https://trackbout.com/ripchord

I also think Phrasebox is incredible, and have also found the developer to be very responsive (I'm another person who asked for the recently-implemented group selection and moving of midi notes). This is easily the best midi plugin purchase I've made in quite a while (and I buy most of them).

For inputting 8-note chords, I tend to use Mozaic Beats' Autotheory in 1+2 stack mode; it works great. (Unlike Ripchord, Mozaic Beats is not free, but I find it to be another worthwhile midi plugin that's well worth the money.)
Top

Thank you all. I did not know about Phrasebox and it indeed looks very great.
Also available demo as Logic midi FX. Will try asap.
Also finally someone created a nice looking and usable GUI for me.
If it now could add actions (like reverse, reset, double, triple etc.) and some other things (maybe it already does?) it would be awesome.
It is already great, just dreaming already from v2 lol.
However, i guess i will buy it to support the developer. Great tool!

Arpado, now stand-alone but the promised VST version should be out soon I hope.
https://arpado.site/index.html#section-overview

Architect – To start with I would like to see the presets and a module and feature list.
viewtopic.php?t=517474

MIDI Ex-Machina (Randomiser, Generator, Euclidiser) Version 2 out soon? How about a VST version? https://github.com/RobU23/ReaScripts/wi ... Ex-Machina for Reaper only.

Unify by PluginGuru – I wonder what midi related plans John and Shane have for Unify.
https://www.pluginguru.com/products/unify-standard/

After all this years this iOS app is still a favorite.
(But if Phrasebox would get actions/events and different numbers of steps per lane (polyrhythm) plus midi channel per lane it would maybe beat it for me and would be my favorite new arp (beside the Logic intern arp).
So far nothing beats it in terms of workflow and usable GUI. Things like Numerology are terrible to use for me.
https://dev.laurentcolson.com/steppolyarp.html
https://youtu.be/UgajHfR1TRU
I would like it as AU/VST as well.
Top

Gotharmann 's LD3 hss loads of potential for this.
Top

Thanks to a positive mention in another thread on arps (which I now can't find), I checked out and then bought Mulab's Mux Modular VST2 plugin, solely because of its arpeggiate-able step sequencer, which as you can see if you carefully scan my screen grab here, not only has remarkable depths (the main screen for it on the left is here set to Offset page—see the tabs—where each little knob allows to shift the timing on any note forward or backward for flam/strum/beat-slicing effects), but it also exists inside a very deep modular environment, which loads vsts, and has a vast range of modules, very like Bidule, but, while less documented, is a lot more approachable, IMO, so far. 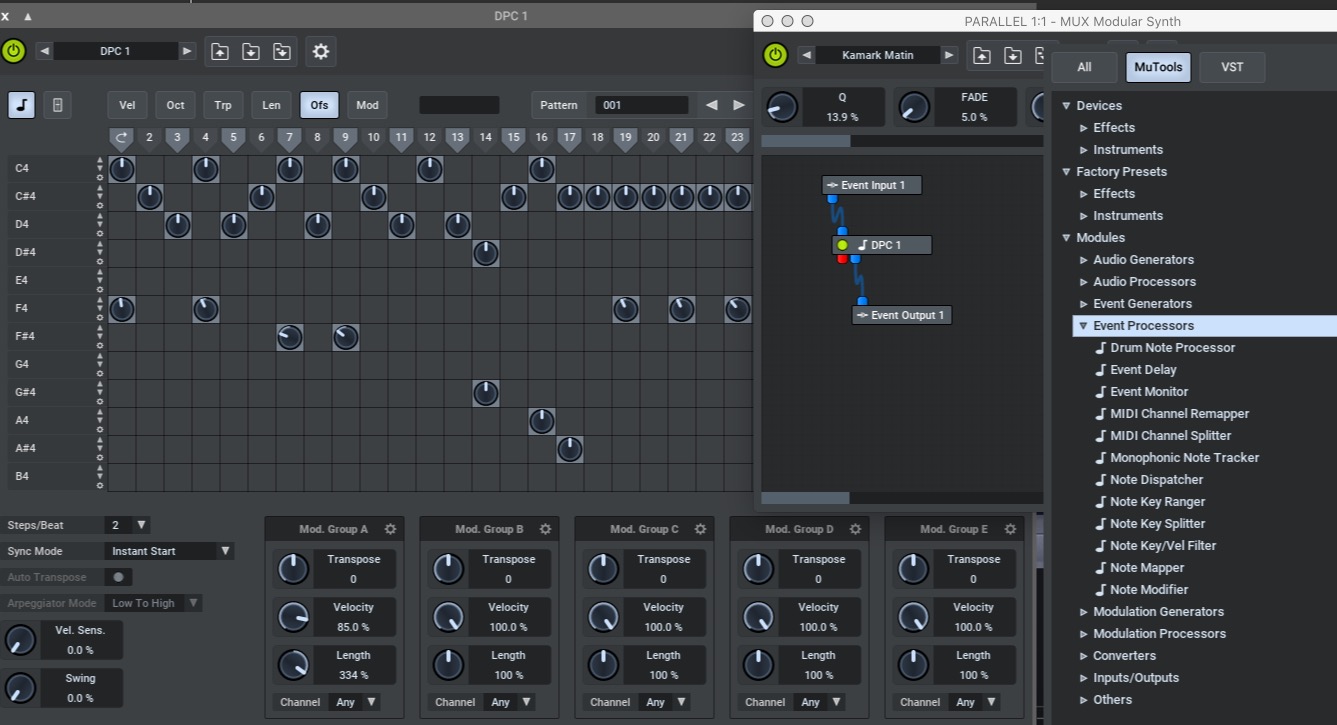 Mux is also pretty much the same thing as MuLab, with all the same features and tools except for a piano roll/tracks environment, so this step-seq demo for MuLab 7 is exactly applicable to the Mux Step Seq; they are the same. (I don't think this video shows the arp feature of the seq, but it's just a switch away, and works great.) All the larger seq. knobs are easily modulated and MIDI-Learned, and it integrates well with Logic's many other MIDI FX, when hosted inside BlueCat's Patchwork running as an AU MIDI Fx.

I'm delighted with it:)
Top

^^^
I have been looking to get Mux but it is not multi-touch capable.

Do they have sales other than Black Friday? I have had my eye on this for a while, too.
Top