The KVR Developer Challenge 2018 is over! The winner is ProF.E.T. by Ignite Amps. There are 26 entries available now, for free, for everyone. Thanks to everyone who entered, donated and voted. See you next time!

This is the thread about the "nix shifter".
nix shifter 02.gif
This is one of the best pitch-shifter IMO. But it
got lost - and we hope that the developer "Nick"
can revive it.

Nix shifter was released within the scope of
the developer challenge 2012 here on KVR, but
it was an "informal release".
You do not have the required permissions to view the files attached to this post.
free mp3s + info: andy-enroe.de songs + weird stuff: enroe.de

Heya enroe mate-
Sorry I didn't pick this up better-
Here's the x64 version that I haven't tidied yet->
--edit>>link later in thread
I'll make this neat soon,
so the link should be good-
but MyCo knows his code best,
I'll pass on some applause for sure-
he'll like that imo

--is this still working as good as ever/right?
I tried to alter the hop to hopefully sidestep the bug that originally put me off this algo
Last edited by nix808 on Sat Sep 29, 2018 4:20 am, edited 1 time in total.
http://www.phonicsaudio.com & https://soundcloud.com/nix808/tracks

I'll see what your "untidied" version does ...

nix808 wrote:Heya enroe mate-
--is this still working as good as ever/right?
I tried to alter the hop to hopefully sidestep the bug that originally put me off this algo

Yeah - really: This is a fantastic shifter!

The 64-bit version is stable in Reaper and in Audacity.
You have enlarged the GUI a little - that's good.
The algo seems the same - just like that of your 2012-32-bit-version,
but the new version needs less CPU-load (only ca. 60% compared to
the 32-bit version). In my short test time there was no crash. And I
couldn't find any bug - so that is great - thank you a lot!

The best aspect is still: For certain vocal-parts this grain-algo
works better than those of other famous pitch-shifter. This little
vst is a real nugget in the VST-folder, since in some cases it
is the one that works best, sometimes it is the only one that does
the job at all.

Thanks Nick - also thanks to the original developer "MyCo"!

No worries!
I'll work on the UI some.
Also I will link MyCo to the thread
ta for bringing this old plug up!
http://www.phonicsaudio.com & https://soundcloud.com/nix808/tracks

We can see that this shifter is very versatile: It can do
strong hard + heavy changes to the sound - good
for experimental styles. But it can also be subtle and
rather natural IMO - it is a multisided beast.

Hiya rcath!
ta for upping the vid 8D
There is more range on the LFO at 2:04,
it's shifted 2.14 semis, but it goes up to 36-
thanks for letting me know you'd liker more speed, I'll change it to audiorate at max.
I have this open in FS, maybe I'll try make it look a bit nicer and do the speed mod.
Cheers
http://www.phonicsaudio.com & https://soundcloud.com/nix808/tracks

Thanks for the encouragement enroe!
I'll keep up developing in the coming months
http://www.phonicsaudio.com & https://soundcloud.com/nix808/tracks

there's preset saving problems in this rebuild sorry,
will fix it
http://www.phonicsaudio.com & https://soundcloud.com/nix808/tracks

On the lfo...a much slower lowest speed (4 bars/30 seconds?) as well as faster and a much lower depth on the LFO (maybe put the knob on a log or exponential scale instead of linear (I can never getr the first two straight) would be great additions. I also think it would be nice to have the Beat/Div/hist dropdown combined with the rate knob so that it is all in one place instead of having the knob not work. This one is going in my regular vst folder. I really enjoyed messing around with it,. Any chance of wet/dry control? not a deal breaker but would make things useful as inserts as well as sends. Thank you for your hard work on this. too bad there is not any way to vote for it!
my experimental improv duo, rreplay.
more of my music
occasional experimental sound blog all things vst, guitar synth, and more.
The Digital Guitarist.
Top

Also a quick question: What does "fast/slow" do on the eq?...couldn't quite hear what was going on.
my experimental improv duo, rreplay.
more of my music
occasional experimental sound blog all things vst, guitar synth, and more.
The Digital Guitarist.
Top

fast/slow was an optim, to make it use less cpu
that option is gone now.
Here's the new rebuild->
edit-- dl in next post>>

let me know what's up if anything's wrong
http://www.phonicsaudio.com & https://soundcloud.com/nix808/tracks

I worked on this some more->
https://www.sendspace.com/pro/dl/p6aqnu 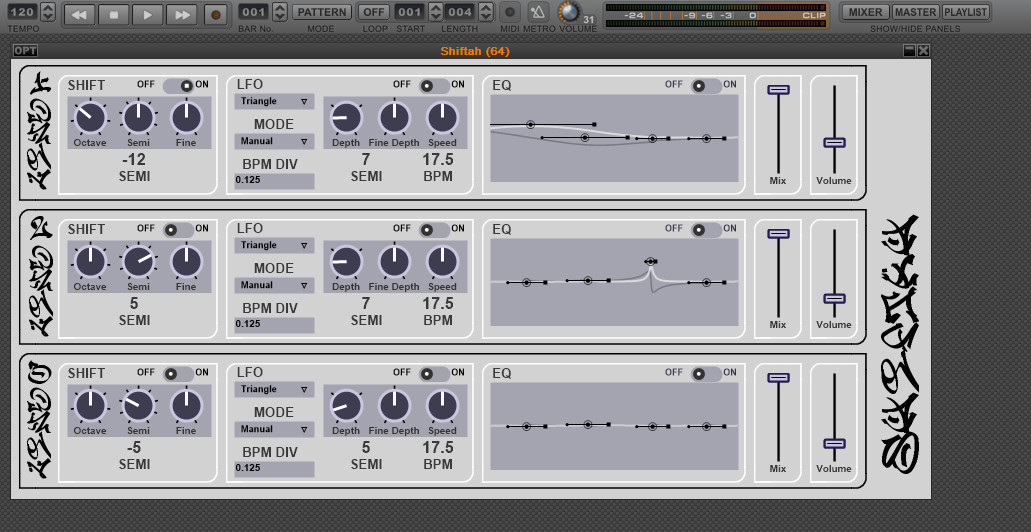 The graphics are all vector, except for the headers text
it's tidy inside
I could make some colour dialogs?
What else would be cool?
http://www.phonicsaudio.com & https://soundcloud.com/nix808/tracks