Here's something you don't see everyday.

The only known copy of the original Velvet Underground and Nico sessions up for auction on ebay.

thanx fer the heads up. my bid is in
"Most people who experiment with drugs are not lying in the streets, suffocating on their own vomit. If you want to see some of that, go to the Pub on Saturday night at closing time." ozwest
Top

damn, i'm outbid already
"Most people who experiment with drugs are not lying in the streets, suffocating on their own vomit. If you want to see some of that, go to the Pub on Saturday night at closing time." ozwest
Top

i just heard an old navy commercial with vu inspired music. it's pretty important stuff
"Most people who experiment with drugs are not lying in the streets, suffocating on their own vomit. If you want to see some of that, go to the Pub on Saturday night at closing time." ozwest
Top

Not only is the outrageous price because it's important, the label (or labels) are probably bidding on this as well looking for a new release.
Top

But Nico is so very bad.

She always reminded me of the mistress from Citizen Kane.
john gump on the web
Top

Wow, this is quite a flashback! I was in Florence Greenberg's office at Scepter-Wand Studio in NYC listening to B.J Thomas' pre-release recording of "Mama" while the Velvet Underground was recording European Son (they were overtime on my band's time). I walked into the (4-track) studio after their session and a broken bowl was lying on the floor (you can hear the crash on the recording). Andy Warhol was running around yelling "you're going to be stars!". In the studio was a "set" of drums (a bass drum on its side and a few other drums), a Vox bass amp with 1-18" speaker, a Vox lead guitar amp with 1-12" speaker and 1-15" speaker, and a Silvertone rhythm guitar amp with 2-12" speakers. I don't know who the lead guitarist was, but I asked him why the rhythm guitarist used a Silvertone amp when Vox gave them free amps every week (they kept blowing them out) and he said "because the he likes the sound". Dumb question, but I was only 16 at the time. Nico wasn't there. Neither was the purple banana.
Top

Thats interesting, I wonder if the eventual owner would have the right to release that material commercialy. Iv got a compilation album of Velvet Underground.

Anyway, if you look here; http://en.wikipedia.org/wiki/Velvet_underground
there is a bit about The Velvet Underground.

From what Iv read that mother disk?, is related to their first album The Velvet Underground and Nico. Nico only sang three songs on that album and it was the only album of theirs she had anything to do whith. The german Nico was introduced by Andy Warhole when he became their manager. I assume its that contrast that makes that album interesting. 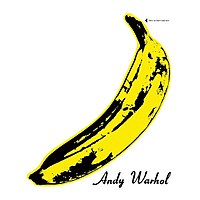 The Velvet Underground and Nico is sometimes referred to as the "banana album" as it features a Warhol print of a banana on the cover. Early copies of the album invited the owner to "Peel slowly and see"; peeling back the skin on the regular releases (numbered SVLP9184) revealed a flesh-colored banana underneath. A limited number of covers were released which either had a male torso under the banana (issues numbered V5008), or a picture of the band (issues numbered V65008

The Velvet Underground was a book about sadomasochism by Michael Leigh that Reed found when he moved into his New York City apartment (left by previous tenant Tony Conrad). Reed and Morrison have reported the group liked the name, considering it evocative of "underground cinema," and fitting, due to Reed's already having written "Venus In Furs", inspired by Leopold von Sacher-Masoch's book of the same name, also dealing with sadomasochism.

Lou Reed and John Cale were start the of the band. Lou Reed penned the first single "the Ostrich" around 65 some where, under the band name the Primitives, which was put togeter to support the single. A bit later Reed, Cale and Morrision recorded some demo's, and had Marian Faithfull in mind, but nothing come of it. The demo's were included in a later box set release in 95.

"Check how you're protected
PayPal This item is covered up to $1,000 See eligibility"

And strangely the bid count has declined. I guess there were either a lot of retracted bids or a lot of deleted idiot accounts.
Top

I would absolutely love it if this were a scam and the seller ran off with all the money.
My Youtube Channel - Wires Dream Disasters :: My Band - Tacoma Narrows Bridge Disaster
Product owner working for inMusic Brands - posting here in a personal capacity, but I will assist with any BFD related questions - hit me up!
Top
23 posts