Recommendations for an affordable (shortscale) bass

This was the one that came to mind when I saw the thread title. That said, they have a dark tone and unusual balance so it's a "try before you buy" and you'll either love it or you won't.
Top

Although I am quite happy with my Ibanez Acoustic at the moment, I am still pondering getting an electric bass sometime in the future.
I have my eye on one of these
https://www.thomann.de/de/marcus_miller ... _short.htm
Is still in my price range and the Sire Marcus Miller basses have been getting some good reviews all around (which probably should be taken with a grain of salt, as always).

I’ll probably just go to my local guitar store and check what they have there, short scale or not, just to get a feeling, as I have really no clue about basses, e.g. what qualifies as a “good” sound etc.
Top

The MM bass looks very nice. If you have the cash to splash, go for it. Might be a good idea to actually try something though either way if you are gonna plump down dollars like that!

I bought a 3/4 scale SX bass (precision copy) a few years ago. Paid about 130 quid for it IIRC. Very nice wood. Rosewood (or what looks a lot like Rosewood fingerboard), beautiful kinda flamed honey maple neck. Super tacky and bright blue metallicish paint on the body (love it) and to finish off a reddish tortoise-shell pick guard. Shouldn't work, but just like some of the Revelation guitars, it somehow does.

Everything on it screams quality and even if it's not a perfect finish, how the hell they knocked this out at the 150 bucks price range is beyond me. Made in Spain IIRC, but may be very wrong about that. Prolly China. 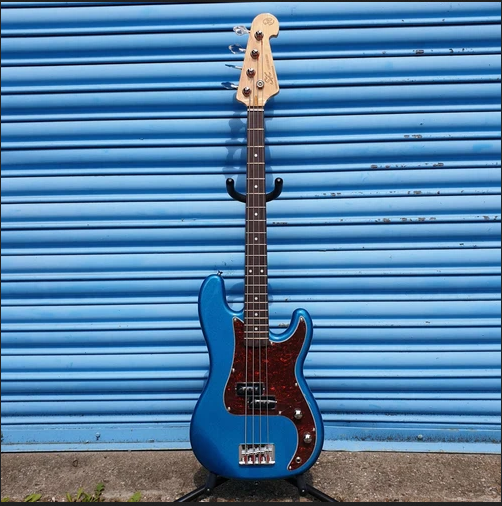 But you can get it for £149 from here - https://rainbowmusicstore.co.uk/product ... ass-guitar

Prolly for not much longer. These things sell out like hot cakes.

It's a great sounding bass. Not the typical rounded, dubby, bottom end you usually get from a P-Bass, it's a bit crunchier and 'edgy' - think JJ Burnell of Stranglers fame. It sounds like a double bass unplugged and has a nice volume to it. Intonation is great. Action on mine was a bit high but I took it down a bit and intonated it. Could go lower, but I don't mind digging in!

I loaned it to a couple of six year old girls in the local pub and when I got it back some f**ker (I don't think it was the girls) had warped the neck by putting quadruple pressure on the neck by tunging the strings almost to snapping point. I was almost in tears when I opened the included gig bag. And even though I've never had a good experience with loaning shit out to people and vowed I'd never loan a thing again, I made a solid promise to myself after that. Cool story 'bro, I know.

Anyway, I imagine it had been in this state a while, but I retuned it down and I had to do some pretty severe truss-rod work. A lot of guitarists are afraid of this. But this is testament to the fact you needn't be scared, a guitar neck is an extremely resilent thing if done properly. I retuned it. Though it was at the absolute edge of what the truss-rod would allow IIRC. I set up the intonation again because my god did it need it after that bloody butchery. All good.

So, I think that speaks for itself that you are getting a very high quality instrument for the price. I love it would never part with it now.

The pups are good, no, great, for the price, you can get a kinda dubby more typical P-Bass 'round' sound by cutting off the treble. But it has a range between that and full on 'twangy' I suppose that has a sweet spot that I like. You could also substitute flat-wound bass strings which are not as twangy as round-wound. No idea about gauges though at this level of things. But it's an option if you need it.

Been playing over 4 decades now. P-Bass was my first ever Bass. A lot of guys on the Talk Bass forum have these and love them - lots of threads for more testament to their greatness. Yeah, it's a banger or an old knocker of a price and it's just rude the extra unexpected quality you get on top. It would make an ideal first bass for a kid. In fact, a lot of the guys on the Talk Bass forums have done just that. Always questions asking when will it be back in stock. Those links I just gave mean they probably won't be left in stock past the next week at the very most.

A lot of professional players buy these guitars to 'couch-practice' or as a kind of 'travelling-guitar' if space allows. But they all say the same thing: this is an instrument that just about stands up on its own two feet in its own right! It really is a superb instrument. If you can find one.

I just got it out now to test it - to see if there had been any lasting damage done by those f**kers who nearly snapped the neck. It was still in tune! Almost unbelievable. But true none the less. It was a few months ago when I got it back and had to do that work.

So don't be afraid to have a right old go of your truss-rod. Guitar technicians have always made this out to be some kind of black art - I get it - they need to protect their trade - but it's not so true a lot of the time. Guitars and basses both have one thing in common in this regard to being set up - you are always aiming for a slightly concave dip in the very centre of the fretboard. This is because of how strings vibrate and basic physics, like how gravity always bows a long bridge down more in the middle, so do strings vibrate, hence needing more 'clearance' in the centre. You can look this up on youtube.

Back to the SX bass in question:

They are going now for £183 on amazon - that's 50 bucks more than I paid for it. But still, snap it up if you can - it's worth every penny. I probably wouldn't pay more than that for one tbh, but that is still a reasonable price. 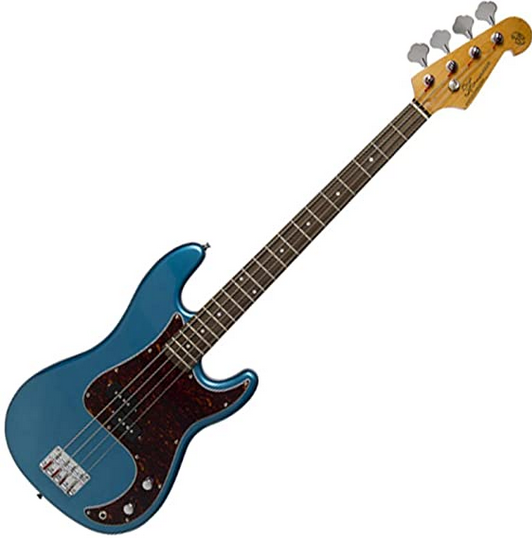 It's got a lovely (what looks like over-sized) paddle head stock on it. And as all guitar lovers know, it's ok to copy guitars, but not headstocks as they are seen as the signature of the instrument, as that is where the main decal resides. This one is done tastefully and works well. The machiine heads are solid and like butter to operate, considering the price range.

Anyway, OP, that MM Bass looks a proper winner and if you could get in to try it out, I'm sure you'd be very happy walking out with it. An instrument like that is one you can keep for life. Pro-tip: Never, ever, under any circumstances sell your first guitar. I sold my first Bass and it's worth thousands now, being made by a company that has become a well-known top boutique trader - Moon. But it's not the money. The only solace I take is the fact that they guy I sold it to still has it almost 4 decades later. It's the only instrument he owns and he will never sell it. That gives me some kind of peace that it went to someone who cherishes it.

Everyone else in the UK reading this thread, y'all better hurry now if you want to pick up one of those SX basses. They won't be around for much longer. But don't fret, they'll be back in stock in a few months if you keep your eyes open...

The first person to grab that one for £149 (link above) is gonna be over the moon!
Top

What's New @ KVR Audio
Latest Plugin Deals & Offers
LVC-Audio Pre-Summer SaleKuassa Announces May Madness Sale. Up to 43% off Amp Sims and FXsMeldaProduction offers 50% Off MDrummer, MDrumReplacer, MCombMB and MStereoGeneratorIceBreaker Audio boutique Kontakt instruments 25% off at Time+SpaceW. A. Production 3in1 "Production Hack Bundle" 93% discountUnitedPlugins DIFIX - 50% OffUVI Deal: 60% off Retro Organ Suite through May 17th, 2021APD: 60% Off Preparato Piano by Xperimenta ProjectTHEPHONOLOOP 2021 Spring Sale - 20% off everything until end of May 21st 2021Newfangled Audio Sale - Save up to 50%See All #KVRDealsSee All KVR Marketplace Deals