i'd like to lock pressure with the stylus button, if possible. sometimes i don't want it to jump to zero when i leave the tablet.
Top


le_NEKO wrote:Also, is there a way to disable the snapping thing ????
if no, it think it is another feature request


le_NEKO wrote:super idea, i just hope the gui will be less dangerous when editing. i hope see soon the v.1.0 in my mailbox

I know what you mean - try using the keyboard to navigate (arrow keys and tab + ENTER to activate the parameter dialog)
http://www.livelab.dk - slice up your life
Top

le_NEKO wrote:oh and a lock position for editing parameter without f**king with the size and pos. of the elements.

I see your point. For now, you can use the enter key to activate the parameter dialog. I'll add the lock button soon though.
http://www.livelab.dk - slice up your life
Top

fabi wrote:i'd like to lock pressure with the stylus button, if possible. sometimes i don't want it to jump to zero when i leave the tablet.

I'll look into it - I've been having trouble reading button presses from my pen though, so I might need to get another tablet. I really like the idea sos I'll look into it for the next update (soon - summer holiday's over )
http://www.livelab.dk - slice up your life
Top

i mean, in the same way we could add button and sliders with the pen (hitting b and s), could be really usefull to correct a false move when editing, instead of delete the element, redraw from start and set again each parameters.
Top

Why not create software like tablet to midi, but for touchscreen LCD ?

Something for convert tablet pc, in something like lemour controller!!

I know no have multitouch screen, but anyway can be very usefull controller !!

We can conver any tablet pc, or lcd conected to pc, and build or custom contoller, with visual feedback...........

I could use CAPS-LOCK or some key combination to toggle between edit-mode and play mode.

I hoppe can add this feature, belivme can be really usefull.
But make something with same gui like lemur, can be better, lemur have very nice sliders and buttons : )
Top

Hi
I'was working on monophonic continuous keyboard. I've made it in Kontakt. It works fine, but I don't transmit "note on" message, only pitch, from X coordinate and amplitude from pen pressure. It goes stright to oscilattor.
14-byte CC is great. I use double CC for X/Y position and it is the only way to have smooth pitch control. 2 octaves on 8x6' intuos2 works fine.
I'd like to use stylus side buttons for octave transpose (one up and another-down).

How can I read state of the pen side buttons?

It could be another CC, with binnary 0(released) and 127(pressed) states or maybe note ON, with assignable note number, or program change message?

thanks for great software
Top

why dont you make a layout that places all the buttons similar to a mackie control and make it emulate the mackie? that would be sweet. or has someone alreayd made a template that does this?

i wouldn't mid being able to see the pointer a little more clearly too. my eyes strain to find it in transparent mode.

you should also group it with lots of templates that are preconfigured for standard instruments, etc
Top

Hi, I just bought the full version. I was waiting for a full VST version. Very lovely. One suggestion... it would be great to have all of the pens buttons as parameters in the controls (especially the xy).
Top

sorry one more though... the addition of a gate for each control in the config panel that would allow you to set a button to enable or disable the control only when held
Top

would it involve a lot of work to be able to send keystrokes as well as midi?
Top

globalgoon wrote:would it involve a lot of work to be able to send keystrokes as well as midi?


actually, I'm using the mackiecontrol setup in live, which covers most of the things i needed keystrokes for

- Smaller pen crosshairs. My controller preset setup has 200 sliders, switches and xy's now and it is sometimes hard to keep them on a single control. The crosshairs extend outside the controls too far.
Can you make the pen cross hairs smaller?
- Any way to toggle lock in a controller area?

Thanks... Lots of fun. I did send a log file back to you on the printing issues. Much closer.

Thanks flipot aka Mr.C
Top

BTW - I am not using it in transparent mode - I roll it up. Still when I use it on a controller, it is sometimes hard not to have it effect an adjacent controller too. So perhaps.. automatically - when in transparent mode a big easy to see crosshairs and when not a smaller one... Or maybe what i really want is just less active area of the crosshairs... They can stay that big... but the resolution of the grapics tab allows for fine control. So maybe the only a small percentage of the crosshairs is actually active. I am not sure I am being clear here????
Thanks
Top

01. I just found this program STEIM junXion which will take any USB data stream and easily shape it into MIDI. I would love to have something like this for PC. Be able to buy any weird/old/bizarre/defunct off-the-shelf controller and turn it into a controller. I know you've done a lot of the work already with turning the tablet/touch data into different types of high res MIDI data. OSC support would be a nice as well.

02. Another idea is to turn Tablet 2 Midi into an app that will allow a touchscreen to be run from the computer as a controller like the Lemur (similar to the MonoTouchLive but with all the cool features of Tablet 2 Midi). Single-touch though.. but small touch screens are now cheap. Saw this on mux.ca there are 8" touchscreen which shows-up as an USB mouse device.. for about $170USD very nice. Here's one model:

This one has a pen, others do not.


03. This applies to the current Tablet 2 MIDI VST version or idea 02. Create a controller version (run on a second monitor ideally) that has Lemur-like features (controlled by tablet or touch screen) like animated controllers, definable/tweakable behaviours (choose from set of parameters, or even simple python-like scripts), and the ability to link animated behaviours in a modular/procedural way (like assigning an LFO to an LFO, but in visual terms - this project could probably get as big as you like). Animated visual interface that could have different controllers assigned to different aspects of the interface/visual controller gui like motion capture.. (ex. P5 midi glove rotation changes the size of a circular xy controllers, random LFOs assigned to speed and orientation of moving circular xy controllers, with collision physics applied, etc etc). OK single-touch touch screen, but with idea 01, or many MIDI inputs, you could have a nice meta-controller.

FYI I just posted some similar stuff in this thread. 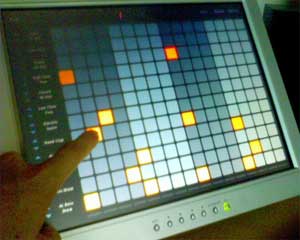