We are very excited to announce the release of Blue Cat's PatchWork 1.7, bringing super flexible audio routing for your plug-ins chains.

With up to 16 I/O channels for the standalone application, external sidechain input for the effect and auxiliary outputs for the instrument,Blue Cat's PatchWork external connection capabilities have been brought to a new level.

"With great power comes great responsibility", so this new release also adds new internal audio routing features: you can now select the I/O channels used for each plug-in - it is very easy to create aux sends, process individual channels separately or apply effects the sidechain signal, without having to manage cable connections! 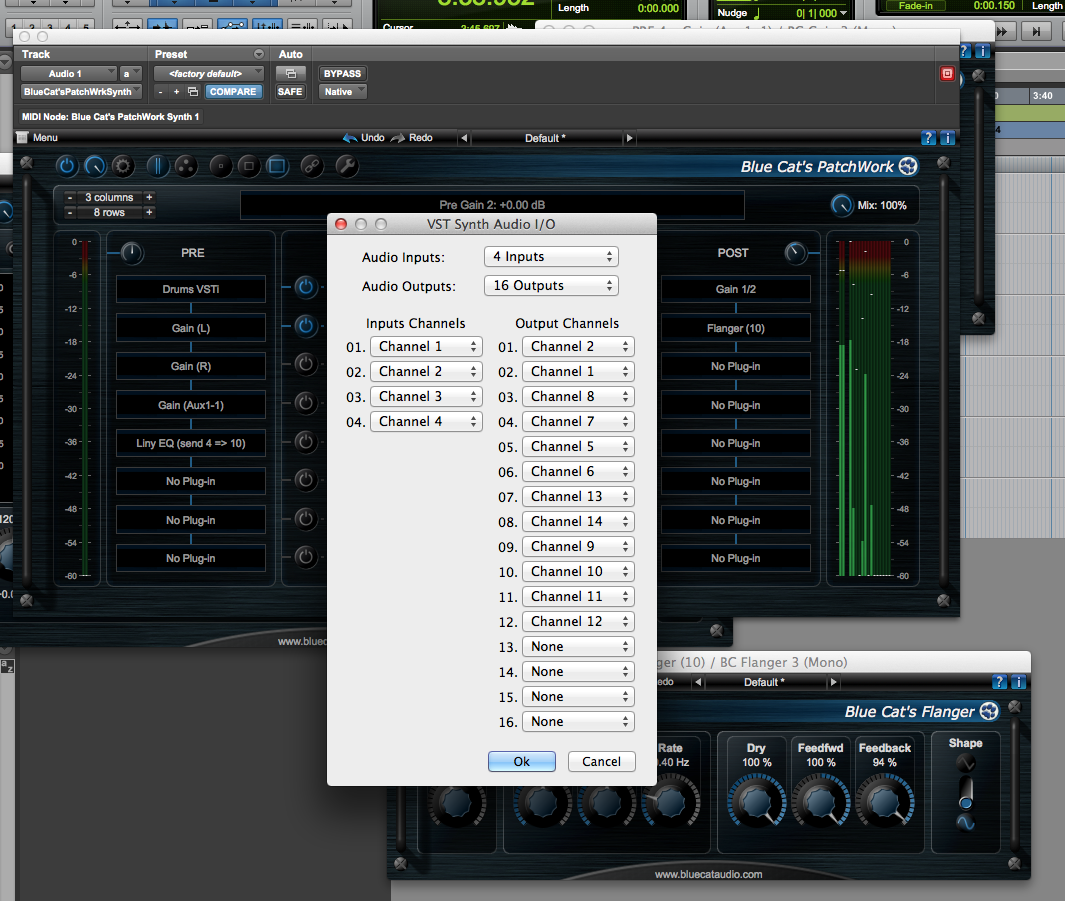 Please check the PatchWork page for more details, or our blog post about these new features.

This update is of course free for existing customers and can be downloaded from the same page as the original full version.

if this means that BC Patchwork Synth offers routing from the AUX outputs from a multi aux out instrument plugin within PT11 this sound's really really nice, but i've tried to route audio out of the access virus synth plugin (AU(VST) though different AUX outputs of BlueCat Synth (PW AUX 1 - 7) in PT11 but did not get any sound out at that channels (audio from different aux outs just comes out on the instrument track with the plugin on).

I can't see such an menu dialog "VST synth audio I/O" in the PatchWork synth nor PatchWork plugin - if i click on "audio I/O" in the drop down menu i just can select the amount of input and output channels - depending from the AU /VST instrument plugin (under PT11).

I always see 7 "PAW AUX" channels - independent from how many channels the instrument "generates" under "Audio I/O". I.e. i tried to load Kontakt 5 as VST which generates 64 channels - but i can't select which channel should be routed to which aux or similar (as shown in the screenshot here in the docs).

That's indeed the idea. However the plug-in will not change its number of aux busses based on the plug-ins that have been loaded, as hosts applications cannot update the number of busses in real time.

Here is the way it works in Pro Tools:
- the PatchWork Synth plug-in (on a stereo track) has 1 main bus and 7 aux busses (each one with 2 audio channels). That's a total of 16 audio outputs.
- when you insert a synth with multiple outputs (such as Kontakt for example), in most cases, the outputs of the instrument are automatically mapped in order (main stereo out to ch1 and ch2, then other extra outputs from channel 3 to 16). In Pro Tools, the main outputs are directly routed to the track, and aux busses (1 to 7 / ch3 to ch16) are available as aux busses. PW Aux 1 contains channel 3 and 4, PW Aux 2 ch 5/6 etc.
- if you want to map outputs differently then you can use the Audio I/O command, but in most cases it is not necessary.
- the effects and level controls after the instrument inside PatchWork only apply to the main bus channels (ch 1/2 for a stereo track), but you can still apply effect plug-ins to aux channels by selecting the audio I/O connections for these plug-ins manually if you want.

So in your case, you may want to first try using Kontakt with an instrument playing on channels 3/4 and use the PW Aux 1 bus to listen to it.

Many thanks for that details and very helpful explanation! Will try this today.
---
((d^b))
dettenbach audio
http://dettenbach.com

after fiddling with it - the new audio routing facilities are really cool and useful features of which we waited / hoped for (i.e. for my Access Virus TI while Access is not able to provide an AAX for their flagship 'til2day...). Very cool that you brought out these with 1.7 on my birthday after i made a feature request for it to you (assume this was a random, but a nice birthday present for me ±ß) and i hope that others will recognize the many new possibilities and flexibility PatchWork has to offer more with this new functionality.

This is customer support on his best level!...

The SatYatunes skins have just been updated to support the new features, Check them out!

Please, create a plugin scanner that offers better info about the plugins that are in the folders. This will make patchworkx more usable and easyer for us to choose from a list of available plugins. Use a kind of list like logic x list.