Please welcome Blue Cat's MB-7 Mixer 3.2, with drag and drop support for plug-ins, performance improvements, an impulse response loader for the built-in EQ and several fixes! This is a recommended free update for registered customers!

Note: as usual, the update for V3 users can be downloaded from the same location as the original full version (link received by email upon purchase). 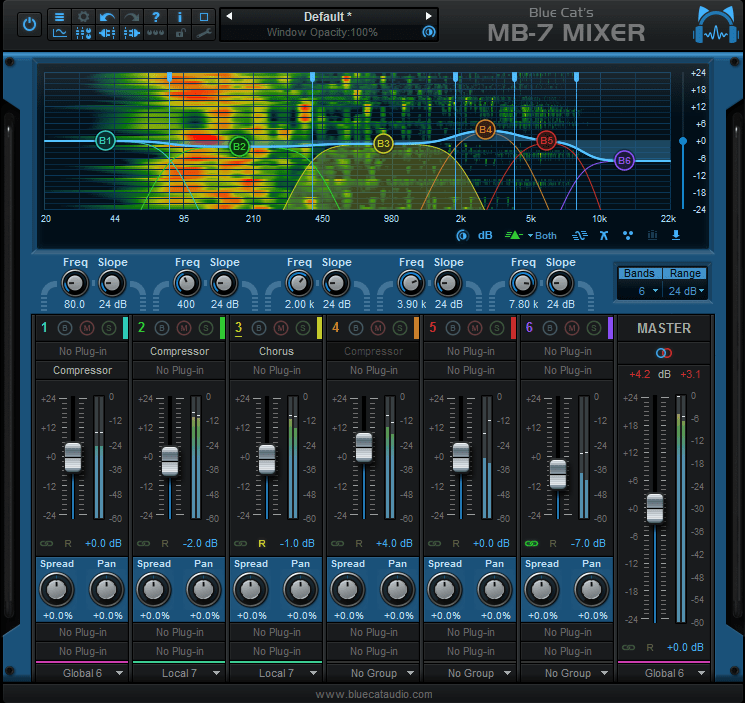 What's New in MB-7 Mixer V3.2:
- Drag and drop plug-ins between slots.
- Hold the alt key on Mac and Ctrl key on windows to copy (duplicate) a plug-in instead of moving it.
- Drop the plug-in before another to insert it in the chain.
- Drag and drop plug-ins between several instances of the MB-7 Mixer or across plug-ins (compatible with the latest version of PatchWork, Late Replies and Axiom).
- Drag and drop .dll, .vst, .vst3, or .component files directly from the Finder or Explorer onto plug-in slots.
- Drag and drop .plgnfo files (previously saved from the software) directly from the Finder or Explorer onto plug-in slots.
- Built-in EQ plug-in can now load and manipulate impulse responses (IR).
- Spectrum analysis is now performed in the background and does not affect audio performance.
- Improved performance of the built-in EQ plug-in.
- Improved performance when saving preset/session with many built-in plug-ins.
- Fixed: effect tail not processed anymore when just inserted on a track (avoids using CPU when not necessary).
- Fixed: built-in multitap delay plug-in could get out of sync in some host applications.
- Fixed: sweep filter, flanger and tremolo plug-ins could fail to initialize rate when using tempo sync and loaded from an MB-7 Mixer preset.