Come back from the dead!

Come back from the dead!

It's it about time for EnergyXT to come back from the dead?
It's just so much easier than any other DAW that I have tried for composing constellations of plugins. I try to use Kushview Element for this today, but even that doesn't really get to the speed and ergonomic efficiency of EnergyXT.
Top

It's probably safe to say it's not being actively developed anymore though. But I may be wrong. Just so many dead links on the website. About 4 years now since XT3 came out and not any more updates - not a word. Would be nice to see updates. Jorgen knows we'd be happy to pay for them (he even went to a different payment model * in v3 for future updates, if you check the notes - still no updates).

*
License model in version 3.0 changed to donationware for updates

I'm happy with sixes and sevens...

Still making up themes for it. I'm just refining at this point but I'm still finding things in there to change stuff about, just like I'm finding that there is a world of complexity and deep flexibility inside the XT2 program itself.

In fact, XT is proving to be something of a long term winner with regard to routing flexibility and even program stability, never mind speed of use (and still the fastest startup times in the business). CPU's just get faster, XT doesn't grow older. XT just keeps loading just as fast as it ever did: couple of seconds, if that.

It rarely crashes. It doesn't waste time scanning plugs. You can install new plugs while XT is running and a quick refresh means it will read them. If you faff about with lots of new knobs and sliders (like in some of my skins) it means the program needs an extra couple of seconds to load.

I recently got a bit deeper in to modular view. Don't forget that XT is a semi-modular environment. It's not exactly REAKTOR, but it's certainly not as difficult to use as REAKTOR if you just want to mess about with connecting different 'blocks'. 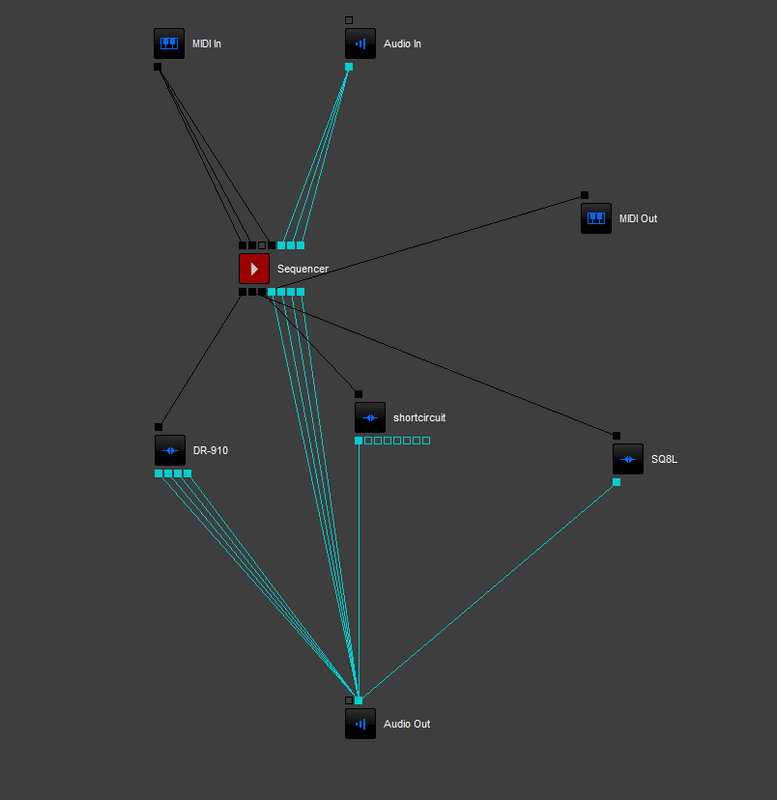 It's essential to understand the triple paradigm that is the Modular:Sequencer:Mixer

They kind of connect to each other, as you would expect, but sometimes, kind of don't. I must admit, after many years, I'm still finding new ways of doing things. Is it as flexible as XT1 was? No. Those days have gone. But it does a lot very well. A lot that other programs can't even attempt to do.

I just made up some templates for midi/audio triggering and sidechaining of gates/compressors/transient designers - some extremely complex stuff is a breeze in XT. I wouldn't even attempt some of this shit in other DAWs. And besides that, you can have fun and play in the garden with XT. Sure, there's a good bit to hate, but there's a lot more to love.

Most of you know me by now and know that I've been a long time Cubase user, and that I've got a pretty good grasp of all the major hosts on the market. A few passed me by like Renoise and Audiomulch (but never say never) but I've found a good place to rest my head for all my songwriting/recording/mixing/mastering needs with the others I have. XT is at the top of the list. It's a superb test bed for VST plugins, even to this day, working on everything from XP to win7 to winX. And a better musical scratchpad you could not ask for. I'm probably repeating myself here. I like XT. A lot.

Keep in mind this program costs about 15 quid last time I looked. And even if you can't get the older VSTi version, I'm pretty sure if you asked nicely, someone, somewhere would provide you with that (you'd need your own reg key). Would it still work? Yeah. Would it be super stable? Nah.

I try to use Kushview Element for this today, but even that doesn't really get to the speed and ergonomic efficiency of EnergyXT.

I have Element as well. Great software. Still being worked on and updated.

Nothing will ever compare to XT. Not v1, not v2.

I'll spare you all the 'first girlfriend' analogies.

It's just a very cheap tool that works. Is compatible under different OS's. Is very fast and very usable and surprisingly bug free probably due to its streamlined core.

Lots of people still use it. I bet a lot of people still buy it considering there is no more powerful DAW on the planet for the price. Maybe Sonar but that is free so doesn't count!

There are even people still using XT1. But you know, some of us are not ashamed of being real ale and stout drinkers, but we don't burst in to a noisy bar full of lager louts and profess our undying love for CAMRA.

Ok, maybe some of us do!

But we have the black eyes to prove it.

Most people want an easy life.

They don't want to get beaten black and blue just to prove a small point that very few other people apart from aficionados will appreciate.

So there are those that don't stick their head above the parapet.

And there are those that just don't share their work and keep things on the down low.

And there are those that pine for the good old days.

Between that lot there isn't much left except for the tragedy of the commons.

But I understand and share each viewpoint to an extent.

So many people could be sharing their work, creating new interest, invoking new ways of working, rekindling old forgotten lores of audio production...

But alas, most just want to talk about how Jorgen abandoned just about the most promising DAW on the planet. And to rub salt in to the wounds, he just ignores everyone who posts. The poison pen stuff I can understand, but he even ignores the love letters (such as I am writing now). Don't worry. I don't pine for anything more from Jorgen or XT. Perhaps the odd unexplored fjord.

These posts always seem to turn up periodically now and again. Some last gasp of hope? XT Software marketing department? Who knows?

All I know is win7 has come to its end in 10 days time. WinX works with XT perfectly well so far. It doesn't get better than that. Job is done. XT will not suddenly start failing on win7 systems next week. I've tried this software on so many computers on so many different test beds. Never fails. Behaves a bit weird sometimes. But works.


XT1 was the real game changer. But the game has changed since then.

Look at the insane amount of 'real' skins that people put together for XT1. Now, those are love letters baby! The GUI editor was annoyingly buggy, and all those files were proper skins not the variations on a theme I knock up like a blind alley cat.

But things moved on. I think Jorgen saw the way the wind was blowing. Then who knows, maybe it just blew a bit faster and he couldn't catch up. Perhaps he just lost interest and didn't care anymore. We'll never know. He's the Greta Garbo of DAW developers. I say this all the time, because it's true.

My viewpoint is just one of a fan. I know nothing. It's all just one big computer game to me. But what a game!

Some of the stuff I've been putting together lately has really rekindled my passion for this program (and it never really waned). I've gone absolutely crazy in to the sidechaining/gating stuff. I did get a few problems with a certain plugin that just kept repeatedly and consistently crashing the XT ecosystem: VolumeShaper!

But here's the thing, and it's happened before. After a while the plug stops crashing, and then it reaches a point where it practically never ever crashes the program. You have to go through a few crashes first to get there, then it evens out. I have no explanation for this.

I'm going to put up my new templates for XT2 that incorporate not just free plugins like ReaGate and whatnot, but some of the best low cost plugins on the market: LFOTool, VolumeShaper, Big Beautiful Door...

And the simple routing will just astound you. But the powerful complexity will also take your breath away. It's very difficult to put in to words. Though I did try.

EnergyXT2 is there for everybody. 15 quid. It hasn't gone away, and it will never go away while XP and win7 systems are in use. WinX remains to be seen, but looking good so far.

You can drag samples on to its internal drum machine from its browser. Its synth is a sampler and loads soundfonts! viewtopic.php?t=495339

Its voice lives on.

If it gets weaker every passing day, well, that's just the way things work.
"Once a junkie, always a junkie, I guess" - Bruce Swedien.
Top 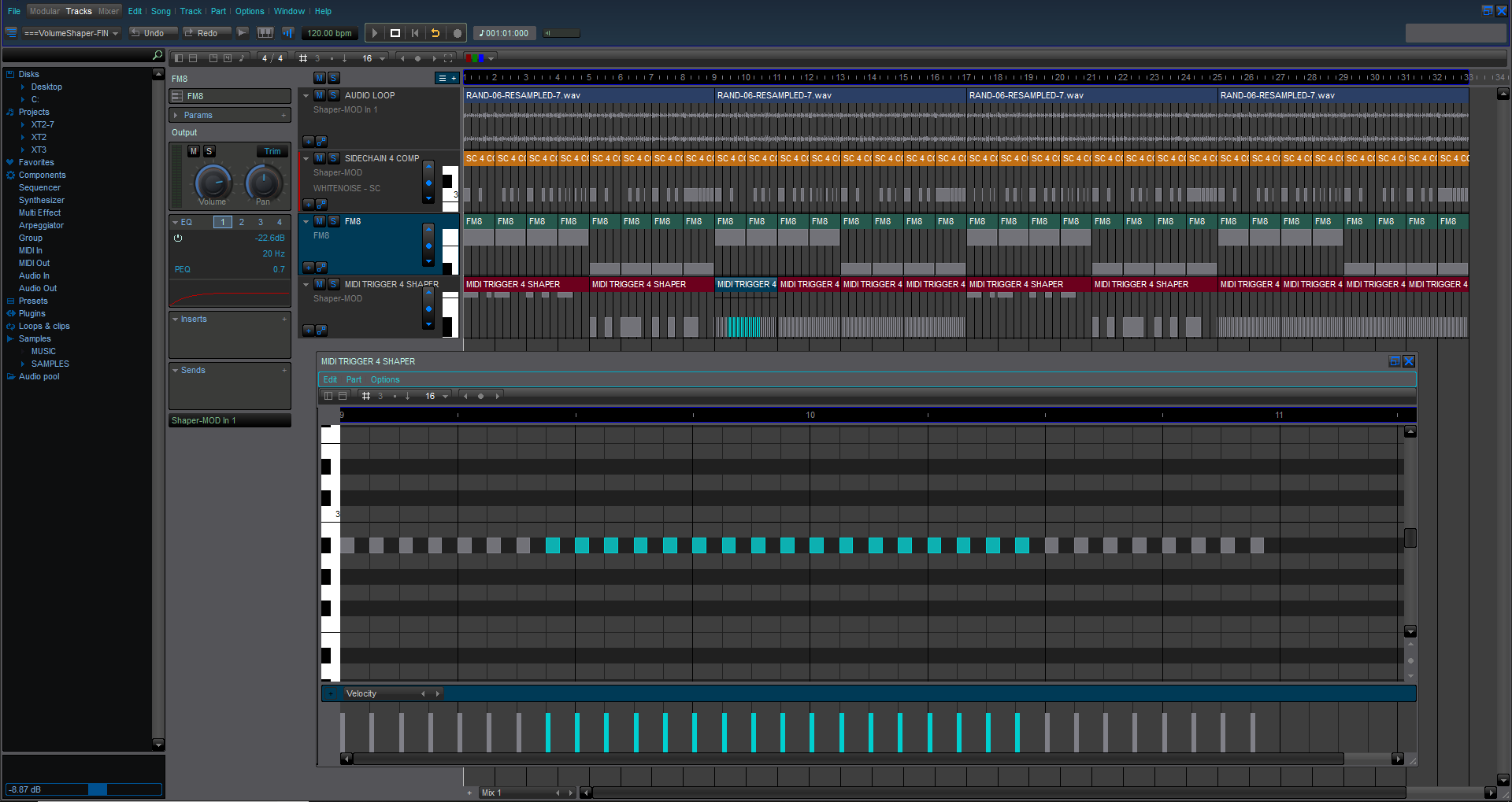 It's got an improved modular view for patching midi/audio stuff together.

Plus it's got a bit of a DMG Audio colour scheme going on.

It may or may not work in other versions of XT.

And don't forget you can dive in to the theme editor and change the knobs/sliders to some you might prefer.

I'll upload this template in a bit. It's got a VolumeShaper being triggered via midi and audio and via sidechain, all via multiband as well. Plus we'll chuck in a hooked up LFOTool and ReaGate as well.

The audio manipulation you will be able to do on your loops will be insane. And all with a very few plugins.
"Once a junkie, always a junkie, I guess" - Bruce Swedien.
Top

It's still my favourite DAW to use as a portable application.. but the nastiest thing that killed it off for 'real' projects is that it somehow has corrupted its projects. I can no longer load some of the larger projects (for me - 20 tracks, most are VST, some are audio).. So we really need some tool to 'validate' the file formats... and/or to deal with things like using the project on a single-monitor system when the last session was on a multi-monitor system.