Ive got the bloody opamps, too.
successfully and consistently snarky
Top

Yup, though of course I never did get around to it myself. Sigh.

(Definitely not judging... I ride the same bus)
Top

I'm in the same boat, though keeping inside for the last year did help me get through a lot of my backlog. I still have a pile of PCBs and schematics and project boxes and blank panels.
Nektar Technology | 3amNoise | Synth Videos | New Album - of the clock
Top

i did wonder, but didnt say anything in case it was a thing in electronics

ghettosynth wrote: ↑
Fri May 07, 2021 8:30 am
OTOH, if I buy an M1 mac now, and it gets the job done in the limited role of being my main studio machine, I may not want an M2 mac, which will be more expensive, and I may be able to wait for an M3 mac mini where it might get a redesign that I approve of more.

Yeah that's a good point. The M1 would likely be enough to keep you going for the next few years. So in that sense buying one now wouldn't be a bad move even if a better model popped up later in the year.

I'm in two minds about my next move. I was going to hold out another year or few and get a third-gen or so 27" iMac with Apple Silicon but lately I've been thinking about getting a Mini in the meantime as a transition machine.

Just picked this up yesterday, finally. Actually, only ordered it 3-4 weeks ago, which is pretty good considering I'm in NZ and I assumed Covid would have f**ked up manufacture and delivery of things like synths. 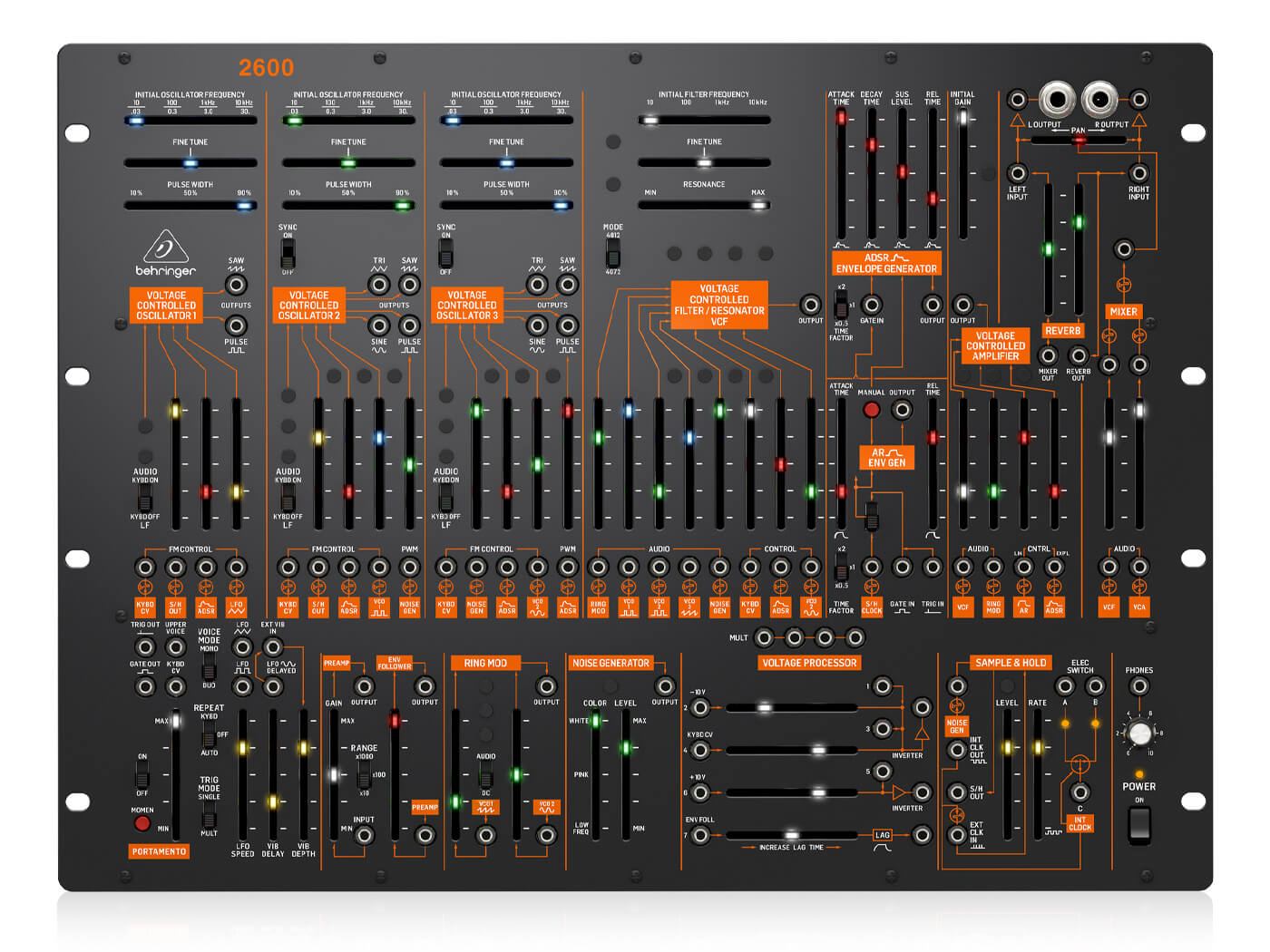 Sadly, I don't think I'll be playing with it until Wednesday (maybe Tuesday evening). Got a pm shift today (don't get home until midnight), followed by 2 night shifts - I could play in the morning after nights, but I know how that'll end...can't work nights without some sleep. So, Wednesday it is - plan is to make a little rack frame for it in the morning (already have 8-unit rails ready) and then make some very strange noises in the basement.

That 2600 is always going to be a bucket list item for me, and the only thing in the way is space for it. Nice one Kritikon.
Top

Keeping in mind this is to supplement 0-Coast, Stega... Is there any downside to adding on ModDemix? I know Strega can do ring mod too, but I really like adding the extra VCA here. I could be wrong, but I think it also ticks off the box as a module that can do more than just 1 thing.

This is what I was thinking (but silver moddemix): 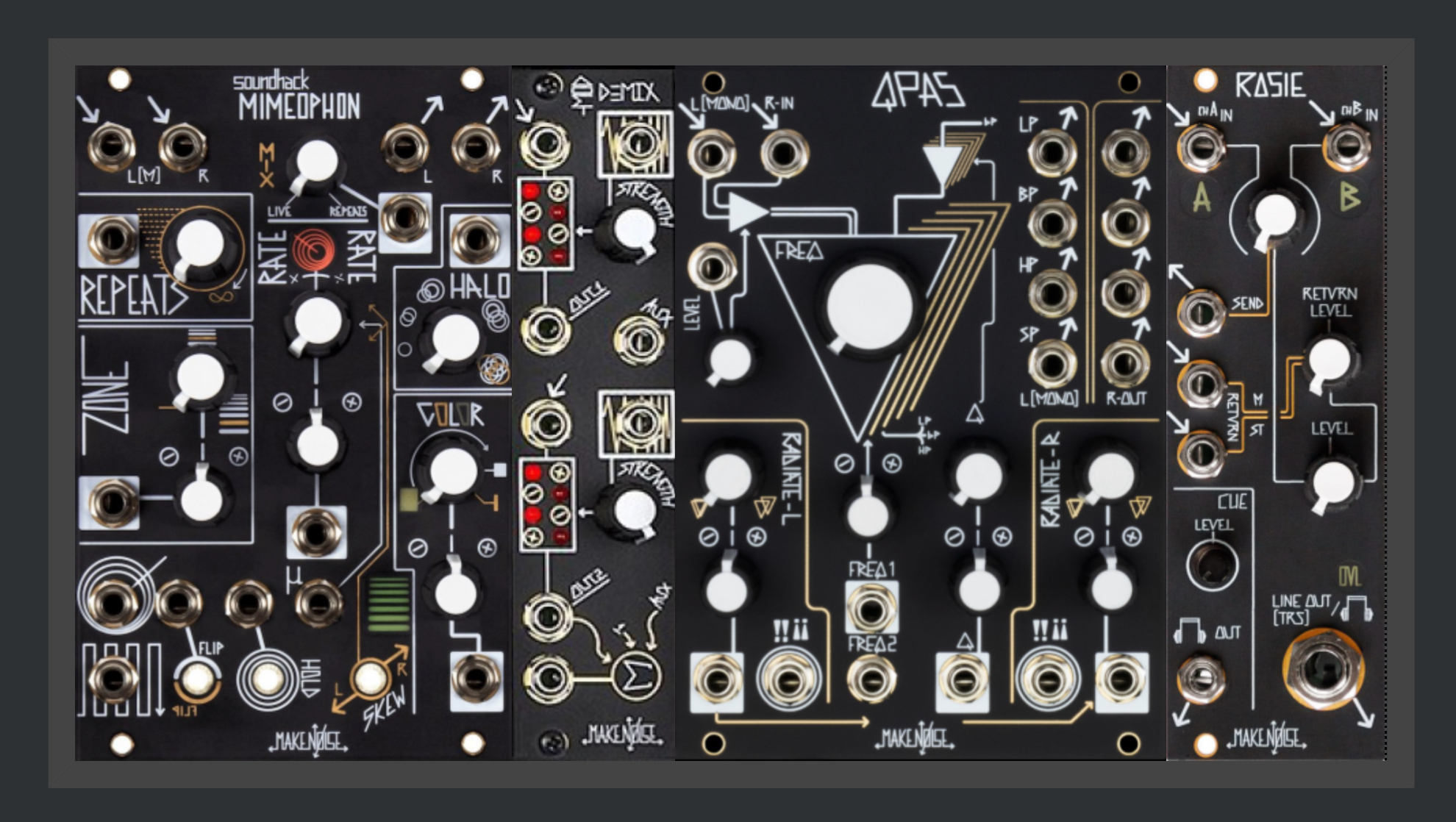 I like the Moddemix, although I am not always sure what that modulation input is doing in every situation.

Keeping in mind this is to supplement 0-Coast, Stega... Is there any downside to adding on ModDemix? I know Strega can do ring mod too, but I really like adding the extra VCA here. I could be wrong, but I think it also ticks off the box as a module that can do more than just 1 thing.

This is what I was thinking (but silver moddemix):

Alrighty-then... we've been busy, haven't we?

First, no. Given your 'mission-statement', there's no "down-side" to adding on ModDemix. It does do more than one thing, and so is less 'redundant' than it may appear. Something I am admittedly overly cautious of (in that deliberating/hesitating sense), in looking for what something brings to the mix, that is unique, or really does augment my system, as I tend to 'double-up' on things.

This (to me) is a "character" module (like 'wave-folders'). One I have not focused on, nor have, (as I have other things), but definitely would do what you think it would do, and use it for, in addition to some surprises > like 'Pekbro' said, above.

Plus, it isn't going to break the bank.

When you get that second 48hp POD (both of which can be powered by a single power block, with a cable for that purpose, as you know) rather than potentially regretting going smaller, for $50 less, as

1. two 48's would look great nestled above the O-coast/Strega sitting side-by-side, in a nifty purpose built case. They obviously don't have to be "Eurorack" mounted, as there are some really cool two and three tier solutions out there, specifically for the Make Noise stuff. Or roll your own, if you are so inclined. 48hp is a smidge over 1/2" wider (3/5" to be exact) than the O-Coast at 45hp... so, easily remedied from an OCD perspective.

2. were you to go with the 'Morphogene' plan, a 48hp would be no more inconvenient to portability than the O-Coast or Strega are, and you would have your I/O and 'mix' functions built in.

https://youtu.be/DJX54RPQ874
Last edited by Shabdahbriah on Fri May 07, 2021 11:21 pm, edited 1 time in total.
I'm not a musician, but I've designed sounds that others use to make music. http://soundcloud.com/obsidiananvil
Top

Personally I can't understand any issue with multi-function modules, to me they are always handy.
They are not always desirable, but they are always handy. I only run into situations where I don't
have enough of something, never too much. Although, I don't use multiples or stacking cables etc.
I may have to go clear across the rig to get to something, but usually I can cover it somewhere.

@Shabdahbriah, That’s a great video. I’ve read the specs and it didn’t click about the bipolar/through 0 modulation. All I knew was that it could be used as a VCA with “colored” or clean sound (depending who was writing about it) and that it could do ring mod.

And yeah... busy. I can be okay with extra modules, but not empty spaces. It’s an OCD thing I guess. That’s why I’m glad it’s a small case!

Rosie is on the way soon. I blame Vurt and Justin for mimeophon... which should be on the way soon too. I was blissfully ignorant until I saw it being used to trigger morphagene.

@pekbro, I’m all for multi-function. It’s gonna help keep this eventual setup “small” (until that becomes false at a later time). For now I’m going to rely on multis. It’s gonna be messy, but using these as desktop devices probably won’t make it so bad.
Top

I started playing around with 2x104hp based on the same Make Noise case in the video. I’m not married to the idea yet, but I’m trying get a feel of what I’d want to add in.

For the OCD, another 48hp pod would definitely be a proper fit, but I keep running out space with it too quickly. I’ll take more time on that (I hope).
Top

pekbro wrote: ↑
Fri May 07, 2021 11:16 pm
Personally I can't understand any issue with multi-function modules, to me they are always handy.They are not always desirable, but they are always handy. I only run into situations where I don't have enough of something, never too much. Although, I don't use multiples or stacking cables etc.[...]

Yeah, I agree, which is in part why I do have tons of 'mults', and 'multiples' of the multi-function modules.

The routing in particular, and proximity thing has always been a visual/ease of use 'dyslexic' (organizational/layout) issue for me, and is a constant consideration, if not source of frustration.

I've been collecting jacks and pots, and switches (the cool paddle 'momentary/off/on' type ones like on the Synthesis Technology stuff) while mocking-up a passive and active (buffered) mult-switch panel (basically an elaborate patch bay) like the Make Noise 'cv distribution strip', for my rig, if only to free-up hp. I want to have one between each row.
Last edited by Shabdahbriah on Sat May 08, 2021 1:26 am, edited 1 time in total.
I'm not a musician, but I've designed sounds that others use to make music. http://soundcloud.com/obsidiananvil
Top
1492 posts