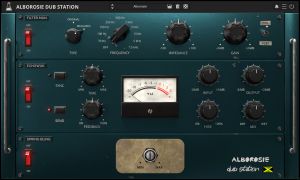 Alborosie Dub Station is a multi-effect plugin that carefully recreates the original filter, echos, and spring reverb pre-owned, modified, and used by the legendary Osbourne Ruddock "King Tubby" – producer, studio engineer, and pioneer of dub reggae from the golden era of the 70s – from Alborosie's personal vintage gear collection.

ECHOWUK: directly from federal studios, then King Tubby studio in Waterhouse Kingston, the MCI 2 track tape that was used to record and also to create the echo effect for most of the reggae classics overall and popular Tubby's instrumental dub mixes.

SPRING BLING: directly from King Tubby studio in Waterhouse Kingston, the modified Fairchild Spring Reverb used by the Maestro himself in most classic records and dub mixes he recorded and produced.

FILTER MAN: modeled after Tubby's so-called "Big Knob", a passive high-pass filter with eleven frequency steps from 70Hz to 7.5kHz. This filter defined the sound of the entire 'roots' area of Jamaican music.

This is the real deal. I still use Twangstrom, but as a set, the filter + delay + springs are dope.