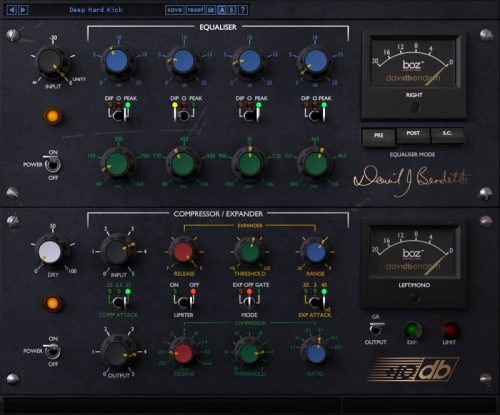 +10db is a channel strip plugin meticulously modeled after one of the industries most iconic hardware compressors. Unless you refuse to listen to any music after Beethoven, you most certainly have heard this unit in action. Best yet, this is the first time this hardware unit has been available in plugin format.

This bundle gives you 3 plugins:

+10db is the first of it's kind channel strip plugin. This plugin is modeled after a very highly sought after compressor hardware unit. We didn't just use the hardware unit for inspiration, we dug in deep and made sure that it sounded just like the original.

Why model this unit?
Here's the deal. It seems like everybody is modeling hardware these days, but we wanted to do something a little different. We didn't want to model any hardware units that have been done a million times. We wanted to do something that had never been done before but has been an icon in the recording industry, and the only way to do that was to team up with producer/mixer David Bendeth. He just happened to have a few of these in his rack, so he sent us one to pore over.

Unless you stopped listening to music after "Johnny B Goode" then you have most definitely heard this hardware unit many many times. Think of Led Zeppelin drums.

In order to get this same compressor in hardware, not only would you have to pay over $2,000 to get one, but you'd have to deal with all the other drawbacks of using analog hardware. For a very small fraction of the price, you can get that same sound in the much more convenient software format. There are really no downsides (unless you live in Alaska an need a room heater).

A few extra features
Since we weren't bound by the limits of the analog hardware, we took the liberty of adding a couple features that make this even more powerful than the original hardware. For one, we added a "Dry Passthrough" knob that makes parallel compression super easy, without having to set up extra buses.

3 Plugins in 1
When you buy the +10db bundle, you actually walk away with three separate plugins: +10db Compressor, +10db Equaliser and +10db Channel Strip.