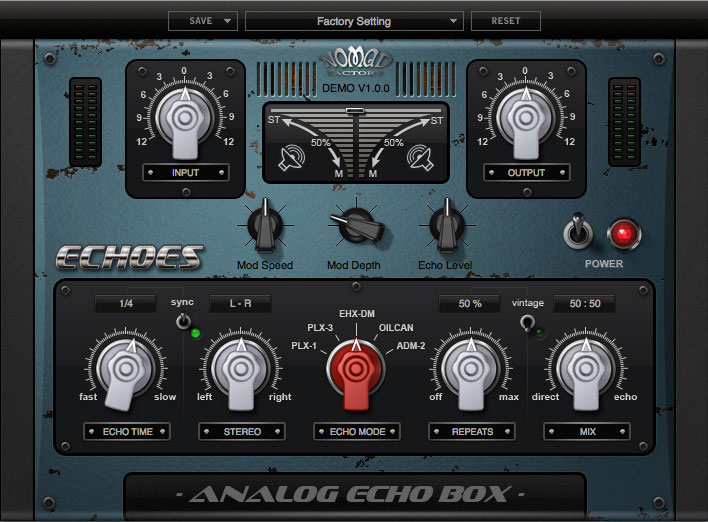 At this time Nomad Factory does not support Catalina, nor Big Sur.

Nomad Factory is proud to introduce Echoes, a new Analog Echo Box plug-in designed to give you the warmth and richness of classic vintage delay effects. Following the philosophy behind Nomad Factory's hit Magnetic plug-in, Echoes not only sounds amazing, but it is designed to be very easy to use.

This is a very cool analog style echo plug in for those who want a simple easy to use interface, it's not as tweakable as Soundtoys Echoboy or Fxpansion's Bloom or even Fabfilter's Timeless but in my setup I find it very usable ...

- Cool sound (5 echo models) great on vox, shines on electric guitars, clean or distorted. Echoes character is dark, lo-fi and gritty on the first two echoplex models, the other three are smoother, EHX sounds cleaner with a resonant hi end, the Oil Can echo is my fav. I think it's the darkest (but clean sounding) of all. ADM-2 sounds a lot like an analog delay pedal which is great, this one is the cleanest of the bunch.

- No ilok required (thanks!), easy to activate.

- Capable of many different textures so it's not a one trick pony (but not the most versatile out there, see below).

- Syncable to tempo (as you would expect).

- Feedback repeats can be filtered using the vintage switch.

- Control for stereo width and ping pong pan knob. Wide stereo or mono, this is a good thing.

- Fast Workflow ! Quick and easy to use. The nice interface design enhances your work flow with this one which is great, (at the expense of some tweakability). The GUI layout does not get in the way at all and lets you dial the sound you want FAST. It may sound redundant I know but many delay plug ins are just too fiddly.

- Stable (on my system at least). No stability problems with my setup. Smooth :o)

The not so good stuff :

- Only bypass can be automated in the version (1.1.0) I got, LAME ! Hope Nomad Factory will implement full automation of all parameters soon, every other major delay / echo plug in is able to record your tweaks, it was a bit frustrating to find out you can't automate feedback and any other parameters to create that trippy echo sound at this time.

- Echoplex models are not as accurate. They are a bit too fuzzy for my taste and as you turn up the drive knob you can hear a very nasty clipping thing, it's harsh but not in a good way, not cool. There's room for improvement here. That said it may be cool when you need a really harsh distorted echo sound.

- Not enough control over modulation parameters.

- Not enough control over how the feedback repeats are filtered. There's a high frequency roll off going on when you turn the vintage switch on but that's it, how about a high pass filter too Nomad Factory guys ?

- When not locked to tempo increments are in 10 milliseconds only.

- Not as versatile as other delay / echo plug ins. (But still cool).

- When you switch echo models all your tweaks are lost. How about having the plug in remember your previous tweaks ? that way you can compare without having to re dial your previous settings.

NOTE : As an insert effect Echoes will affect the overall tone depending of the model you choose, this might not be what you want so if you prefer to leave your source untouched use it as a send effect instead. That said as an insert effect you can get around that by using the mix knob and the echo level knob, useful stuff.

Overall I liked this plug in and I suggest you give it a try, I'm keeping it. I must note that I was looking for a dirty dark sounding delay so this one fits what I want perfectly, I'm liking the textures I'm getting with Echoes very much, if you want dirty, fuzzy, dark sounding echoes you may like Analog Echo Box a lot but if you are looking for a clean sounding pristine effect you may want to look elsewhere, this one is for the gritty stuff.

I've read many negative comments regarding Echoes but I have to say I don't get all the negative reviews I've read on some forums, Echoes is a very good sounding plug in, and it sits great in a mix context.

Alternatively Bloom by Fxpansion costs about the same (I got Echoes for $99 at the don't crack website) and offers a lot more control, (but it takes a lot longer to tweak) if you are a total tweak head get Bloom instead but for a fast work flow and good overall sound that's very usable Echoes doesn't disappoint.