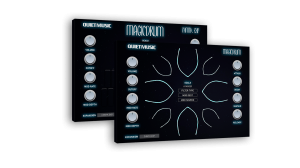 We have been as similar as possible to the original instrument but at popular request we have added a new update that includes an expansion with 12 new presets with chromatic scales throughout 2 octaves. This new Expansion includes 1 main preset, 10 presets with effects and 1 preset with all the previous sounds in random robin mode.

Quiet Music's MagicDrum is a tongue drum with more then good sounds! It has a wide chromatic set of tongue drums that come in handy knowing that most music has half steps in it. Joke, no joke:) The tuning of these drums is very well done. Download a trial version and enjoy before you buy.