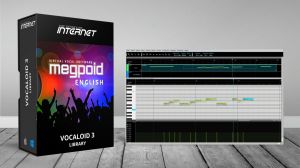 Megpoid English is the virtual vocal software based on voice of Megumi Nakajima who is a Japanese singer and voice actress.

Just enter the melody and lyrics, and hear Megumi sing your song. It really is that simple, and can be used for any song. Her voice is clear and relaxed, and retain its quality when applied to any tempo. Using Megpoid allows you to create any song with a wide range of parameters, to produce a new female vocal sound:

Vocaloid is a technology for singing voice synthesis developed by Yamaha, and the name of this software application. The software allows users to input melody and lyrics in order to synthesize singing. In other words, with this technology, singing can be produced without a singer. Singing voice synthesis is produced by using fragments of voices recorded from actual singers, called the Singer Library.

Megumi Nakajima (born March 5th, 1989) is a Japanese singer and voice actress. In 2007, she auditioned to the Victor Entertainment sanctioned "Victor Vocal & Voice Audition" and was chosen to voice Ranka Lee in Macross Frontier. After releasing "Seikanhikou" as Ranka Lee's character, she released her songs as Megumi Nakajima. Since her fi rst album "I love you" attracted many people, her fan club was established on June 2011. She won the award for Best Musical Performance in the third Seiyu Awards.

The simplified application (Tiny VOCALOID3 Editor for Windows) is attached for the purpose of the test operation. However we strongly recommend you to use "VOCALOID Editor" series in order to create full-fledged songs.

Complete ripoff.
Apparently this is an ancient library that requires a previous purchase of Vocaloid. The advertisement here is strongly misleading.

Looking at this advertisement which I stupidly responded to:
https://www.kvraudio.com/marketplace/megpoid-english-by-internet-co

The following claims are made:

Format(s)
Instrument(s) VST (it's a sound library not an instrument apparently).

Nowhere is the version number (3) listed.
Apparently Vocaloid is currently at version 5, this seems to be a LIBRARY (not Vocaloid) fpr version 3 of Vocaloid (NOT INCLUDED).

Installation certificates for this program are expired (originally from Yamaha) and a security risk.

After spending $65 on the completely worthless crap in this ad, I am inclined to never spend a dime through kvraudio ever again.

The serial number that I get back for "Megpoid English" is not a Vocaloid license.
I tried entering this serial number at the upgrade site
https://www.vocaloid.com/en/shopping_cart/serial_check_for_coupon/827
and it doesn't recognize the license I was given

I was able to authorize "something" on my computer using the license manager, but I can't find vocaloid anywhere on my computer as a plugin or app.
Also all of this documentation that i received AFTER THE PURCHASE refers to Vocaloid3 - and I see that Vocaloid is at Vocaloid5 now!
WHY WOULD I BUY A PROGRAM THAT IS TWO MAJOR VERSIONS BEHIND THE LATEST???
Even if it worked that is - So far I spent $69 for absolutely nothing.