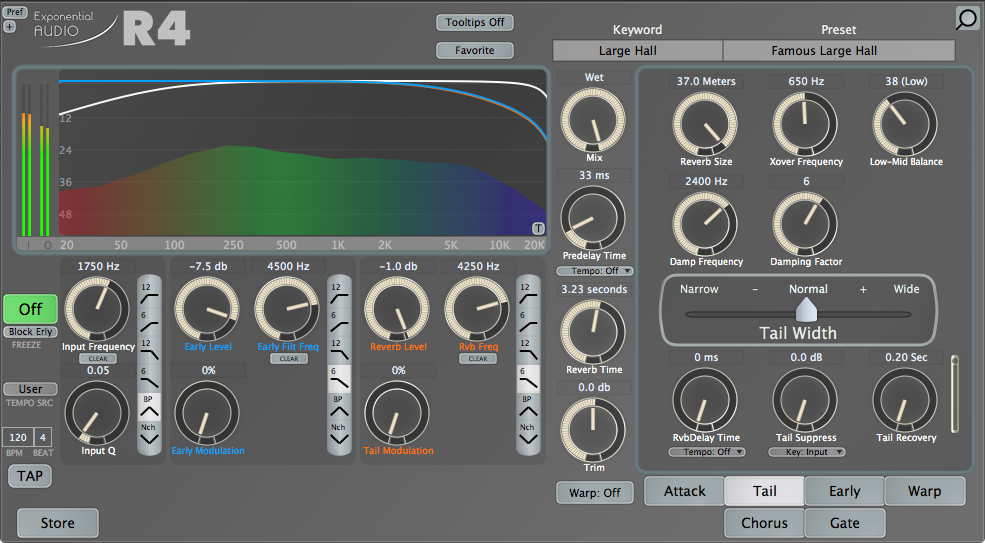 What is it?
ReverbExponential AudioiZotopeR4
Format(s)
Operating System Availability
License & Installation Method
Voucher / Code for redemption on other website
What does this mean?
For related news items, downloads and more please see the full KVR product page for
R4

Every generation of engineers and producers has iconic pieces of studio equipment; they act like markers along the path of recording history. Many top engineers will talk about reverbs in the same way, they will speak of the first time they heard some of the classic hardware reverb units which have created a dynasty over the past few decades. Some of these units have Michael Carnes' fingerprints on them, and his new creation R4 is the next reverb in this royal lineage. R4 offers all the class of historic hardware reverb units but with many new features only possible with modern plug-in development technology. R4 is pure class and for this reason, is destined to become a classic.

NIMBUS set a new standard for transparent reverb with unprecedented flexibility. R4 is about to do the same for character reverb. R4 will transform your mix by adding movement and fatness to the reverb tail.

No CPU hog: R4 is a native plug-in, requiring no special hardware and offering even more flexibility while continuing to work with its now-famous minimal load on your computer.

Easy to use: We know that workflow matters to our users. While R4 is brand new, existing users will find it reassuringly familiar, and new users will find their way around in a matter of minutes. And just to make sure of that, Exponential Audio has once again teamed up with Groove3. You'll find plenty of videos to help you find your way around.

R4 features at a glance:

We've also taken features from NIMBUS that have proved a big hit. These include:

No Room? No Problem

And of course, there's a powerful early-reflection section in R4. Early reflections were where vintage reverbs were weakest. There just weren't enough CPU cycles to provide convincing early energy.

Weak early reflections were less of an issue in the days where everyone had an enormous tracking room; it was simply a case of using the space of a real room. Today's project studios often don't have that option and must rely on more close-miking and directional mics. R4's early section can bring back the naturalness and softness of a big room. And add tempo-following if you need it.

And there's one last thing. Sometimes a reverb just doesn't have enough reverb time. How about forever? R4 has a new Freeze button. Click the button, and the contents of the reverb go into an infinite mode that goes on as long as you like. Whether you're capturing a chord, designing an environment, or creating SFX for a movie, Freeze is a powerful and fun tool to use. Better still, Freeze also has an option that keeps the early section open. You can continue to pass live signal at the same time the tail is frozen. You can also use some of the external controls to tailor the sound of the Freeze after you have captured it.