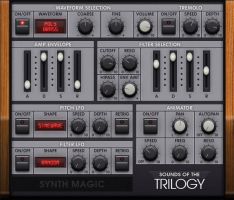 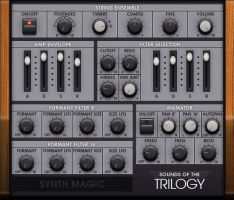 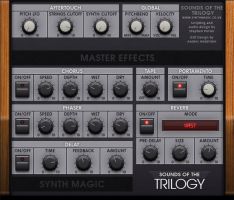 This early 80s analogue synthesizer from Italian manufacturer, Crumar, featured separate synth/organ and strings sections. Not jam-packed with features, like many 'budget' synths of the day, but bags of quirks, charm and character! We've faithfully reprodcued this old gem in its entirety and added a few touches of our own along the way.

INTRODUCING SOUNDS OF THE TRILOGY.

Sounds of the Trilogy is a Kontakt 5 instrument based on the rare and sought after Crumar Trilogy Synthesiser. With over 2GB of 24-bit samples taken from this analogue synth there's plenty to get your teeth into.

The sample library includes lots of sounds made on the Trilogy using its Synthesiser and Organ section. The Ensemble synth has also been sampled with a number of timbre settings to give rich, vibrant analogue sounds.

Like all our instruments the samples are controlled by the intuitive graphical user interface (GUI). The GUI for Sounds of the Trilogy was designed by world renowned GUI designer, Anders Hedstrom (aka Flavours of Lime). No messing around with loading different sections, or having to adjust Kontakt behind the scenes - you can access the whole instrument from the same GUI.

There are 150 presets included to start your sonic journey with Sounds of the Trilogy and remember you can tweak these presets to your own taste so very easily using the custom interface.