The Orchestra - Strings Of Winter 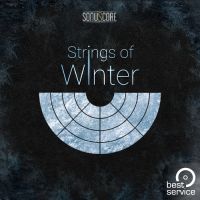 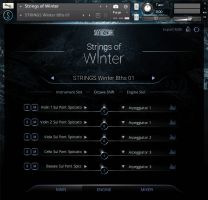 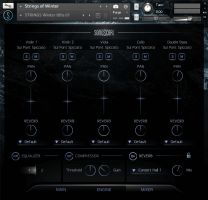 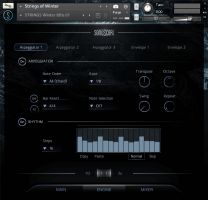 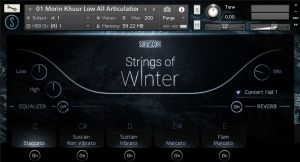 What is it?
Orchestral StringsArpeggiatorsBest ServiceKontakt InstrumentKVR Readers Choice AwardsKVR Readers Choice Awards 2020 WinnerSonuscoreSoundtrackThe OrchestraThe Orchestra - Strings Of Winter
This product is "Powered By" Kontakt Player. The OS and Format icons listed below should be accurate for the latest version of Kontakt Player.
Format(s)
Operating System Availability
Audio Demos
01 The Northern Frontierstrings Only02 Before The Stormstrings Only03 The Horde Awakensstrings And Throat Singing04 Champions Of Darknessstrings Only05 A Dreamy Winter Morning05 A Dreamy Winter Morningstrings And To Harp06 Styxstrings Only
License & Installation Method
Voucher / Code for redemption on other website
Tell Me More
For related news items, downloads and more please see the full KVR product page for
The Orchestra - Strings Of Winter

Strings of Winter - an icy blast of new sounds

Arctic plains. Shimmering glaciers. Far-reaching steppes. A one-of-a-kind instrument that perfectly captures the spirit of these rough, untamed and raw landscapes. An absolutely honest and atypical new sound that portrays scenes of fragile, cold isolation as perfectly as icy and unbridled power. Strings of Winter is here with 60 unheard and pristine articulations performed by a 41-piece European string orchestra and the wonderful and unique Mongolian State Morin Khuur Ensemble.

"TO Strings of Winter" is an independent instrument and revolutionary Kontakt Player library based on the groundbreaking Ensemble Engine developed specifically for "The Orchestra", which lets you turn your ideas into music quickly and easily.

If you already own "The Orchestra", you can buy the very affordable "The Orchestra Complete Upgrade"which includes "Strings of Winter" as well as other great new features.

"TO Strings of Winter" introduces a highly requested, new feature, MIDI Export. Simply drag and drop the MIDI from the Engine right into your favourite DAW. You can change notes and rhythms afterwards for every exported clip. Thus making it a breeze to create variations and emotional changes, without overwriting the arpeggiators and envelopes. You can also use those MIDI files with different instruments - even from other sample libraries.

A 41-piece string orchestra split into 5 sections performed a number of detailed and extended techniques for Strings Of Winter (e.g. Trills, Sul Ponticello, Harmonics, Col Legno, Bartók Pizzicato). The resonance and raw complexity of these new articulations was captured in the classic room of Studio 22 in Budapest. All sections were recorded in their traditional seating position.

The Core - The Ensemble Engine

Strings of Winter features the same powerful engine as our critically acclaimed instrument "The Orchestra". This Engine works through a number of independent arpeggiators and velocity envelopes, heavily inspired by our Sonuscore Origins-Series.

Create pulsating rhythms and even inspiring full arrangements from any combination of notes. All of this without relying on prerecorded phrases – you have the full control. It will work, no matter what chord or note you play. With minimum loading times, a vast amount of presets provides you with full ensemble colors right out of the box:

Take full control over the ensemble

On the Engine page you can access all individual controls for each of the five instrument modules. Short notes can be arranged with the arpeggiators, while sustained notes can be shaped with the velocity envelope. Create the orchestral colors as you need them and let the magic happen.

The arpeggiator creates fascinating melodic patterns to give your project a rich and lively orchestral feeling. Change the pattern of the arpeggiator with the rhythm stepper. If needed, you can modify almost every parameter to stay in full control of your orchestral color.

The Velocity Envelope adds a recurring dynamic movement to a sustaining note. The centerpiece is the envelope shape, which can be drawn freely.

Once you have been inspired by a preset, drag and drop the arrangement of your performance to your DAW. Unleash the power of the ensemble engine onto your personal template, change notes, reinforce the unique sound with other instruments and make the music your own.

Multis take the Ensemble Engine even further toward instant playability and sound as they load and layer multiple instances of TO - Strings Of Winter. Aside from the Ensemble Instrument, Strings Of Winter also contains 64 single instrument patches from the separate sections and as a bonus full ensemble risers, crescendos, falls and hits.

TO - Strings of Winter was developed for Best Service by SonusCore / Dynamedion, the makers of "The Orchestra" as well as NI Action Strings, Action Strikes and Emotive Strings.

Dynamedion was founded in 2000 by Tilman Sillescu and Pierre Langer, two composers with university degrees in music. With a steadily increasing number of contracts and growing customer base it has since become a leader in soundtrack composition and sound design on the European computer game market. In 2005 Dynamedion produced highly successful, first benchmark live orchestra recordings for a German game soundtrack, setting the standard for large-scale projects in the industry. With numerous further orchestral productions for the video game industry, Dynamedion has earned itself a reputation for unsurpassed quality and integrity in this area.

Customers who like The Orchestra - Strings Of Winter also viewed...

Products similar to The Orchestra - Strings Of Winter...