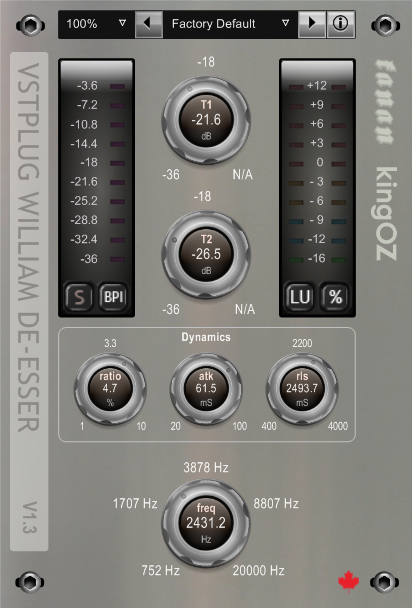 What is it?
De-esserCompressorDSPplugKing Oz RecordsLimiterVSTplug william de-esser
Format(s)
Operating System Availability
License & Installation Method
No License Required
Tell Me More
Important Note
There is a small issue arisen from a new font database detection method added to prevent missing font errors. The version number to the left becomes zero after changing a preset from the preset manager scroller. This error is superficial and does not affect performance. This, and clicks while changing presets will be resolved in the coming version 1.2.
For related news items, downloads and more please see the full KVR product page for
VSTplug william de-esser

The william de-esser is a good de-esser and it works just as well as many commercial products out there, but the only inconvenience is that it is feature rich.

Given the fact that you can utilize attack and release, as well as that there are two threshold states, you will likely find that the william de-esser is not just a de-esser but a tool for overall track mastering.

The four types of filters make the difference:

Intuitive Loudness Metering:
Choose between dBFS and the world standard LU to see where your track stands in volume level.

There are 2 styles of High pass and 2 styles of bandpass which consist of RBJ, TDF2, ZDF and a generic C+ filter types. Given the fact that these four filters have their own sound and character, it's very possible for the engineer using the william de-esser to add some of that raspiness that they've filtered away with the relevant filter; creating the right effect and arguably giving back some of what it has taken or alternatively, provides an ethereal smoothness in the stead of garbled distortion filtered away.

The william de-esser should be a real pleasure to use, and future changes include adding a dynamic cross-fading mechanism so as to remove/reduce any unwanted noises like clicks during operations like switching presets. king OZ records fully understands and respects that the professional wants and needs to create no feedback in the case of live performance and demonstrations of engineering.

A demo is soon being released so as to provide those wanting to test the william de-esser. There had been a slight coding error and this is why the version 1.1 is first being released so that some extra needed attention can be given towards the 2.2 version. Speculative customers, apologies for any confusing reference to the version. Hopefully the version error can be corrected as soon as possible.