The much anticipated release of Pro-convert for the Mac computer platform brings the freedom to exchange projects between DAWs to a wider user base and introduces a new user interface for the application. 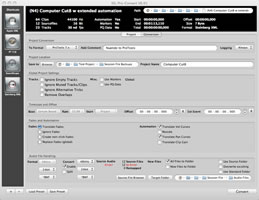 Pro-Convert enables workstation users to convert session files from one format to another. The new Mac version supports several of the most popular workstation formats: ProTools 7.x, Cubase/Nuendo, Logic, Final Cut Pro and SSL's own Soundscape.

The Mac version also sees the introduction of a completely new user interface that will be made available to Windows users in autumn 2009. The new interface presents a single control window from which all project settings can be manipulated. The new interface provides identical functionality to the Windows version of Pro-Convert but streamlines the user experience and facilitates the ability to save conversion presets that enable users to return to frequently used project configurations quickly and efficiently.