Homegrown Sounds has announced the release of HG Electric Sitar, a new VST instrument plug-in for Windows based on a multi-sampled Jerry Jones Electric Sitar, the modern day equivalent of the '60s Dan Electro, used by The Beatles and the Stones. There are 7 different sample sets, each containing at least 4 octaves of samples, one for each note. Any two sample sets can be used simultaneously to give plenty of flexibility for creating interesting Sitar based sounds and atmospheres. 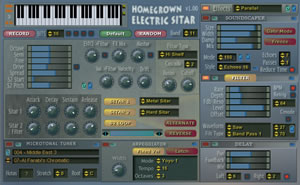 HG Electric Sitar is available for Windows as a VST instrument plug-in. There is a demo version available which has just a single lofi sample set and no Microtuner. The full price is £30 but it is currently available for the introductory offer price of £18.