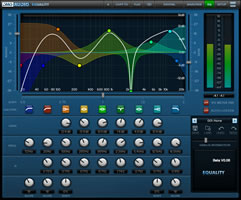 Most people have quite a collection of EQs - some are models of hardware, some are workhorse EQs for surgical correction, or for guiding a track into a mix, some are for mastering. EQuality is not a model of a specific piece of hardware - it's more ambitious than that. EQuality aims to be a great replacement for all your EQs. That's been the driving factor.

DMG Audio says that "from the bottom up, EQuality sounds as good as an EQ can sound. By that, I mean the prototypes are as close to the consistent analogue shapes as can be achieved digitally, without spending extra CPU. When you want to spend extra CPU to close the deal, you can do that too, but so far not many people have reported finding occasions where the difference is perceptible."