ifoundasound has released a new mixer plug-in, Miksebord, and updated the LiveProfessor Beta to v1.2.3. 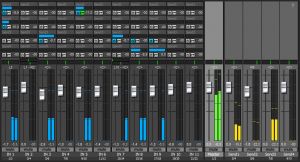 Miksebord is a mixer plug-in with eleven stereo inputs, one stereo master, and four stereo sends. It's available for Windows as a VST effect plug-in and costs €26 / $32. A two-month demo version is available.