Waves Audio, in association with Aphex, has announced the release of their modeled plug-in version of the original Aphex Aural Exciter. 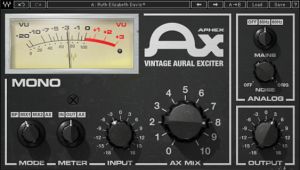 A true ground-breaker at the time, the original Aural Exciter traveled from studio to studio as an exclusive (and expensive) rental unit, bringing its distinctive sound to select sessions by leading recording artists. Highly regarded for its ability to increase and enhance presence, brightness, and detail on vocal tracks and masters alike, the Aural Exciter was even credited as a hardware "session player" on popular albums by the likes of Jackson Browne, Linda Ronstadt and James Taylor.

"The original Aphex model 402 is a part of recording history, with a sound that's uniquely its own," says Aphex CEO David Wiener. "I can't think of better hands to entrust emulating that sound to than to the people at Waves. They've been wonderful to work with, and we're looking forward to more projects in the future."

"We're pleased to add the Waves Aphex Vintage Aural Exciter to our line of modeled plugins based on vintage hardware," says Mick Olesh, Executive VP of Waves Sales & Marketing. "The original Aphex Aural Exciter made a huge impact on the recording industry, and we're confident the new plugin version will be met with the same enthusiasm by our users."