Valhalla DSP has announced that ValhallaRoom is now available for Mac OS X in 32- and 64-bit Audio Units, 32-bit VST, and RTAS effect plug-in formats. The price is $50. Windows versions are coming soon. 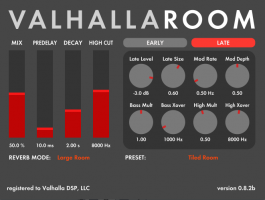 ValhallaRoom is a versatile, true stereo algorithmic reverb. It features several original reverberation algorithms and has been designed from the ground up to produce a wide range of natural reverberation sounds. Sounds range from tight ambiences and rooms, through traditional hall and plate sounds, all the way up to vast modulated spaces. The algorithm designs have been influenced by some of the “classic” room simulation boxes, as well as state of the art modern theory.