Xenobioz has announced the release of a beta version of Kruud, a new free synthesizer VSTi for Windows with a drawable low resolution Oscillator. 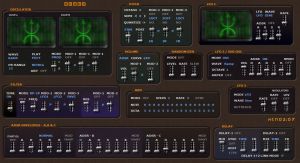 The main Osc has 5 basic waveforms, Pink and white Noise and a drawable user waveform. The waveforms have different modes like Phase Mod, PWM (Square only) and a special morph mode (listed as PWM in the synth) for all but the square wave. The user waveform can mix or morph between two waveforms.