David Mash - Looking at the past and future of technology learning

I apologize in advance for what may come across as a shameless pitch for Berklee College of Music and a good friend of mine. I have been involved with the school in one way or another since the mid-90s. The school is full of smart people and the alumni reads like a "Who's Who" of the Jazz, contemporary music and film scoring communities. A Berklee education isn't required to enjoy success in the music world, but it sure doesn't seem to hurt.

Early in my involvement with Berklee there was advanced the notion that Berklee alumni would often downplay their Berklee education rather than promote it. That has changed in the last 10 years and now artists like Steve Vai, BT, Branford Marsalis, and John Mayer are speaking out with pride about their experiences there.

David Mash is the Senior Vice-President for Innovation, Strategy, and Technology at Berklee and in many ways responsible for the school having perhaps the world's best technology program for contemporary music. He is a great guitar player, technologist, educator, and author. His has written 9 books on music and technology and many of the concepts and approaches he outlined have been integrated into two online courses offered at Berklee through their online continuing education program, Desktop Music Production and Sound Design for the Musician. An earlier work of his on subtractive synthesis has recently been updated by Scott Tibbs at Roland for use with their GAIA synthesizer and is titled "Synthesis: A Practical Approach.".

Oh yes, and he is a good friend who was kind enough to sit down with me to talk technology and education.

What are your earliest memories of music?

My earliest memories are probably as an infant. My mother was a classical pianist and she used to put me in a basket underneath the piano while she gave lessons and played with her chorale groups. She's 98 now and she still plays gigs.

What inspired you to learn guitar instead of another symphonic instrument?

My sisters and I were all discouraged from getting serious about music, but I decided I wanted to play guitar when I noticed how my sisters' girlfriends responded to Elvis Presley when he played on TV.

That really dates you. Are you sure you don't want to say "The Beatles?". 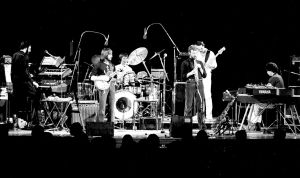 I was actually playing gigs when the Beatles became popular so that will date me even more… (chuckles) I started playing when I was seven and just really fell in love with it. In my early teens I played in wedding bands, playing jazz standards, and rock and roll songs of the period. I grew up in Detroit so I was into Motown and R&B. Later I got into Jimi Hendrix and Jeff Beck and then when I got into my early 20s I discovered jazz and players like John McLaughlin who completely blew my mind.

Yes. I started there in 1973. In those days there were three majors at the college: Composition, Performance, and Music Education. I was a composition major. In my second year I started teaching guitar and then when I graduated in 1976 I became a full time teacher, and taught core music, ensembles, and guitar.

What kind of technology education program was there back then?

There were two electronic music classes when I got there that had been started by Michael Rendish and I studied with him. He was a truly inspirational musician and teacher, and certainly one of my role models. We were using ARP 2600s so I learned about analog synthesis, connecting modules with patch cables, etc. In 1976 I bought a 2600 for myself along with an ARP 1602 step-sequencer. Years later, in 1983, I developed a performance synthesis program at Berklee. At the time the idea was to focus on live performance with electronic musical instruments as opposed to the more traditional studio composition approach. 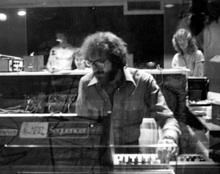 Synthesizers were becoming polyphonic, less modular and more pre-configured, and a lot more popular. They now had memory (to store sounds) and user interfaces had changed enough so that they could be used in a live situation. The DX7 (with a reasonably affordable price) appeared about this time as well as the first affordable sampling instruments. With so many new digital products coming on the market we had to expand the program from the original focus on analog so in 1984 we merged the Electronic Music and Performance Synthesis programs and created the Music Synthesis Major. I served as its founding chair for the first 5 years.

What did you use for a sequencer when you outgrew the 1602?

I started using a Roland MSQ-700 when MIDI was introduced. It had a good amount of note memory, and you could have multiple tracks - each on separate MIDI channels. You could play lots of different instrumental parts from the one device.

When did you start using software in place of hardware?

I first started using Performer in 1986 until Opcode came out with Vision and Studio Vision. When Gibson shut down Vision development I moved to Logic, which is what I use today. My first software synthesizer was probably the Retro-AS from Bitheadz.

What do you see as some of the impacts that software has had on music education?

First and foremost the technology has made it possible to hear complex music as you are writing it and that has had a tremendous impact on the way that we think about teaching music, music theory, composition, arrangement, and orchestration. When I was a student at Berklee it was great that you could hear your music soon after you wrote it. Except at that time, that meant that you wrote a piece of music and then copied out all the parts, and then went to one of the ensembles and got students to sight read it for you. With the wide range of really good sounding instruments in software and very powerful sequencers that we have today it's possible to hear your music instantly and I think that has really accelerated the learning process. 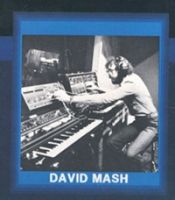 The other thing that's been a huge impact is the amount of information we now have available at our fingertips. With YouTube there are so many performers that you can watch and learn from and there are so many online learning opportunities. Berklee has an amazing online school where there are now over 12,000 students from all over the world taking courses online. The fact that you can be traveling and taking a course from anywhere you can log in is amazing.

Do you think anything has been lost?

I don't think anything has been lost, but I think the technology makes it easier to cheat. By cheat I mean short changing your own musical development because, with pre-recorded loops and pre-set sounds and samples it's easier to make decent sounding music without crafting anything from scratch yourself. And because you are not asking other musicians to interpret your music you are losing access to their unique musical contributions. I think those things are really important parts of making contemporary music.

This is where good teaching comes in because the technology can be used to cut corners, but it can also be used to speed up the learning process and that's where I like to focus. So much of this process is based on aural learning and that is enhanced in a big way if you have the chance to hear things as you are working.

Your title at Berklee is Senior Vice-President for Innovation, Strategy, and Technology. What does that mean?

What are some of the impacts that technology and new learning methods have had on music? 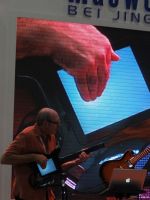 I think that technology has put production power into the hands of anybody now. And that means that more people are able to make music at a much higher level. Which is great. The Internet has made the world very small and so musical genres from all over the world are now available to all of us to hear. That has had a huge impact on the way that musical style is changing quickly and how different elements of different kinds of music from all over the planet are used in different genres.

The promise of Internet2 with almost no latency in audio and video transmission between sites regardless of their location is pretty exciting in terms of students being able to study with great teachers and make music with other great musicians regardless of where they are on the planet.

As I alluded to earlier, the bad news is that the tools have made everything so easy that sometimes people, instead of putting in the extra effort to make great music, are stopping too soon along the development path, and so we get a lot of mediocre music. And of course the fact that music can be so easily distributed has changed the way the whole industry works.

The landscape has unprecedented options today. Where do you see the conversion from a musician's point of view?

I think the ideal that every musician is looking for is the ability to make music and capture your inspiration wherever and whenever you have it. The great thing about today's mobile devices is that you can carry them wherever you go. The best possible scenario would be to be able capture your ideas wherever you are and seamlessly integrate them into your music-making process when you get back to your "studio" when you have access to more powerful tools for the production process.

Mobile devices have only been around for a few years. So, when you look at how far they've come in such a short time, you can imagine that they will just keep getting better because technology is accelerating at an exponential rate. It has to be obvious that people will be able to work in this way in the near future.

Berklee requires entering students to own a laptop now. How long before it's a mobile device?

There are still a lot of important things that can't be done as well on a mobile device and we're watching this very carefully and thinking a lot about it. The next year or two will tell us a lot.

When are you going to get your next laptop?

(More chuckling) At the moment I'm waiting for my new MacBook Pro with Retina display to arrive – I ordered it maxed out with 16 GB RAM and a 768 GB flash drive. I'm hoping to be able to go down to a single machine rather than synchronizing two different computers (laptop and desktop in the studio), which would make my life a lot easier. I spend so much time updating each machine to have the latest stuff and when I go to play live I have to move all of my files and settings from the desktop to the laptop and test it all. It takes up way too much time. Plus you have to authorize the software for two different computers. Everything seems to take forever.

Everything I have been doing for the last year or two has been about playing live so I haven't been maxing out my studio production computer. When I was doing my CD (Mashine Music: Decades) last year I was using 30 to 40 tracks and with gazillions of plug-ins, but I still did the entire mix on my iMac i7.

OK last question, what are your top three all-time contemporary musicians and why?