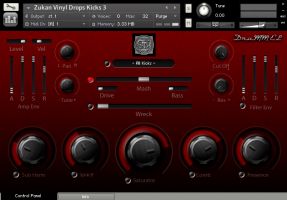 Stretch That Note have released the latest in their on-going range of the DruMM series for Kontakt entitled DruMM Elements.

Elements concentrates on providing individual sample category modules: kicks, snares, claps and so on utilising the STN method of phase cancellation and M/S for 'depth and width'.

The first collection of six NI Kontakt drum modules, also provided as stand-alone sample sets, with serious warping and mangling tools, concentrates on kick samples. Affording extreme yet useful dynamic tools such as Sub Harm, Space, Saturation, Mash, Wreck, Presence and a host of others, DruMM continues the STN philosophy of 'if it can be warped, stretched, mashed or bludgeoned then so be it'.

DruMM Elements is priced at $10 for each module or $50 for the set of six.