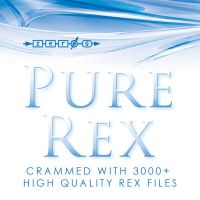 Zero-G has released Pure Rex, which is described as "a definitive collection of more than 3,000 professionally-produced REX files spanning a huge range of genres and styles of music".

From Electro, Disco, Urban and Metal to Chillout, Trance, World and plenty of weird and wonderful experimental sounds, Pure Rex is "crammed with inspiration to give you a massive creative boost".

Why Rex files?
Rex files are one of the most flexible formats to work with. REX files are loops that are divided into slices using Propellerhead's ReCycle software application. This means that when you're using REX files in your music, you can slow down or speed up the tempo and the REX file will follow.

You can also trigger the individual slices of a REX file loop independently of each other to create your own rhythms and riffs. REX files work with a wide variety of software applications like Logic, Pro Tools, Cubase, Sonar, Live and Spectrasonics Stylus RMX.

Pure Rex is available to download now exclusively from Time+Space.