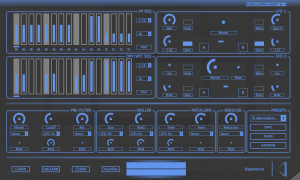 Inear Display has released Danaides, a sequenced effect dedicated to sound mangling for 32- and 64-bit Windows and Mac OS X in VST and AU plug-in formats.

Danaides relies on two sequencers controlling the type of effect applied ("driller", "metalizer" or "reducer", all with pre-filtering) and the amount of processed signal.

To further manipulate the signal, all effect parameters can be modulated by two morphing LFOs, each one containing two sub-LFOs for a total of six modulation sources.