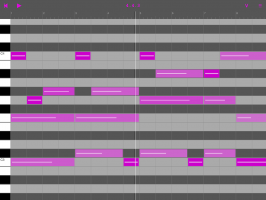 Nikolozi Meladze released MIDI Editor, an iOS app that is designed to turn an iPad into a music sketchpad. Quickly and easily compose melodies, chord progressions and even drum patterns. It works with synths and music apps that support MIDI input. MIDI clips can then be exported to other apps.