Drumdrops has released the Mapex Heavy Rock Kit. Available to buy as five separate packs, this kit is based on the Mapex Saturn Kit which is a favourite for many rock drummers. This is a great sounding rock kit and is available as a Kontakt instrument, multiple sampler software, drum replacement software or just the WAV samples.

The kit belongs to UK rock drummer Jason Bowld which he has used on all his recordings for the last five years for producers such as Andy Sneap, Romesh Dodangoda, Machine, Ulrich Wilde and Colin Richardson. This kit was also used to record the drum tracks album Heavy Rock Drops. What makes this kit special is it comes with three different Mapex snares and four different crash cymbals all carefully sampled in a bright sounding live room.

The recording took place in the now closed Garden Studios in London. The studio had a legendary reputation being owned by John Foxx from Ultravox and Matt Johnson from The The. The live room was capable of providing a huge live sound and it is evident on these samples. At the centre of the Control Room was a Neve 8026 vintage console owned by Producer Craig Silvey and the microphones used ranged from vintage AKG C12's to B&K 4011's alongside the more traditional Sennheiser MD421's, AKG D12 and Shure SM57. The kit was then mixed in one of London's leading mix studios, The Engine Room on an SSL-G Series console.

This kit is available to buy in five separate packs. 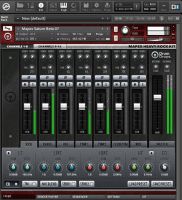 A number of key new features have been added including:

Other key features included are:

The Kontakt Pack is available exclusively from the Drumdrops store costing $ 82.00.

The "Multi-Velocity pack" is suited for customers who want multiple velocity levels and ready made software templates. The pack includes up to sixteen velocities of each articulation. In total it contains 481 drum samples. All of the samples are mixed from a combination of the overhead, room and close mics recorded as 24-bit 44.1 kHz WAV files, meaning they can be loaded into almost any sampler or drum machine. To make things easier though templates are included for some of the most commonly used software packages including:

The Multi-Velocity Pack of the Mapex Heavy Rock Kit costs $ 24.60.

The "All Samples Pack" is suited for customers that want to build their own sampler templates and want access to the WAV samples. No software templates are included in this pack. These samples can be loaded into any DAW, sampler or drum machine that loads 24-bit WAVs.

This completes the 5 packs available for the Mapex Heavy Rock Kit from Drumdrops. All the packs can be purchased exclusively from the online Drumdrops store.