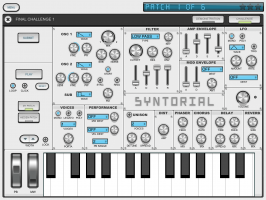 Audible Genius has announced that Syntorial, the synthesizer training app that teaches synth programming and sound design, is now available for iPad.

The iPad app brings the same synth lessons as the desktop app, including video demonstrations and interactive challenges on the same built-in soft synth, but with the added convenience of an on-screen keyboard and iPad portability allowing users to bring Syntorial with them wherever they go.

Dropbox integration allows the syncing of progress between iPad and computer, enabling users to switch devices without starting over. And just like the desktop version, the synth can be launched any time, providing a fully featured synthesizer right on the iPad, with Inter-App Audio, Audiobus, and Virtual MIDI capability, allowing Syntorial's synth to be played and recorded with other apps.

This synth and the first 22 lessons are all part of the free Syntorial app available now in the App Store. Upgrade at any time directly within the app or at Syntorial.com to get all 199 lessons and additional Lesson Packs on the iPad, as well as the desktop version of Syntorial for Mac and PC, and Syntorial's synth as a VST and AU plugin.