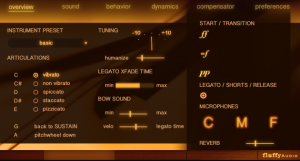 FluffyAudio has released Trio Broz: Solo Cello, for Kontakt 4.2.4 (and above).

Since the Cello is played by Klaus Broz, it naturally blends together with Trio Broz: Solo Violin, played by his sibling Barbara.

A string trio of talented Italian musicians, Barbara (violin), Giada (viola) and Klaus (cello), at the Teatro delle Voci in Treviso. The Cello features up to 3.5 octaves, 3 dynamic layers for sustained articulations, 2 Legato types, 4 Round Robins for short articulations like Spiccato, Staccato and Pizzicato. You have the ability to create your unique sound by mixing the 3 microphones positions (Close, Mid and Far). The sampling was made with high quality gear: Schoeps and AudioTechnica microphones, Neve and Millennia Media preamps: