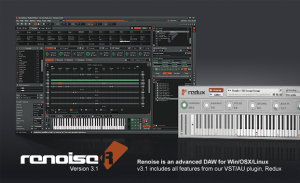 Renoise version 3.1 is now available, which integrates all features from Redux, the VST/AU plugin released earlier last summer, and adds a few long-requested other features and workflow enhancements.

Registered users can download their copies from the Renoise backstage, Demo versions are available at renoise.com/demo

New Features in 3.1 include:

A detailed description of what's new can be found on the Renoise 3.1 launch page.