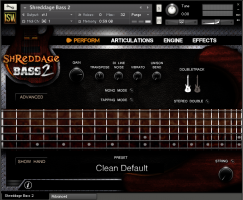 Impact Soundworks has released Shreddage Bass 2, a virtual six string electric bass for Kontakt Player recorded DI through a 100% analog tube preamp and including over 11,000 samples. Expanding on the concept of the original Shreddage Bass library, this new instrument is designed to be used for not only rock & metal, but jazz, pop, blues, funk, and many other genres.

The library features the sound of a custom-made Muckelroy electric bass played with a fingered style covering all crucial articulations - sustain, staccato, harmonics, pops, hammer-on & pull-off, portamento slides, and extra FX. Its clean tone can be used with no processing at all, or sent through the user's choice of pedals, amps, and cabs. A custom effects rack is included within the instrument, including EQs, a compressor, .

Impact Soundworks has programmed Shreddage Bass 2 with the same core engine as their Shreddage series of guitars, allowing for full control over fret & string selection, articulation mapping, extra noises, and performance modes, plus dozens of other options.

Price: $119. Owners of ISW's original Shreddage Bass library can upgrade at a discount.