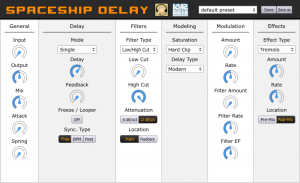 Musical Entropy's contribution to the KVR Developer Challenge 2016, Spaceship Delay, has been updated to version 1.0.5.

The presets and the tutorial files have been updated as well, so it is recommended for the users of the previous versions to update their presets/tutorial folders.

Spaceship Delay has been ranked #3 at KVR Developer Challenge, and this is its first update since the end of the voting period, and the announcement of the results.