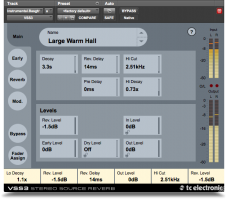 TC Electronic has announced the release of VSS3 Native Stereo Source Reverb, a realistic and versatile reverb for Mac OS X and Windows in AU, AAX and VST plug-on formats.

TC Electronic describe VSS3 Native as "the most realistic and versatile reverb ever made for your DAW". With a wealth of possibilities to adjust, it can deliver the precise sound you need. Choose a preset for quick and no-fuss reverb delight - or move in depth to take full control of the early reflections, body and tail of your reverb.

Ported from the iconic System 6000, TC Electronic says the VSS3 "retains the ambience that made its hardware siblings the go-to reverb for audio professionals around the world. With a wealth of possibilities to tweak, it is perfectly suited for music creation, film and post production and will deliver precisely the sound you want."