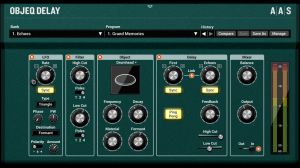 Applied Acoustics Systems has announced the release of Objeq Delay, an all-new effect processor plugin for Mac and Windows.

Objeq Delay is a creative effect plug-in combining acoustic filtering with a clever delay unit. The plate, beam, drumhead, and string objects impart evocative acoustic resonances to the input signal. Further shaping is also available via low- and high-cut filters. The in-series delay acts as a classic unit or can split the first and subsequent repeats to either remodel the attack or create complex rhythmic patterns. An LFO module completes the package with comprehensive modulation destinations to the filter, resonator, and delay parameters.

Pricing and Availability
Objeq Delay is available now at a suggested retail price of US$139 but until May 15th, 2017, it is offered at the introductory price of US$99.