KORG releases iMono/Poly for iOS and updates Gadget for iOS to v3.3.2 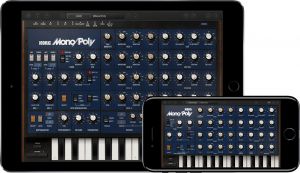 KORG has announced that the iMono/Poly is now available and there is a limited time sale (33% off / $19.99) until Saturday the 30th of September. KORG Gadget for iOS also works with iMono/Poly, as Montpellier, with the now available v3.3 update.

The Mono/Poly analog synthesizer, which first appeared in 1981, is considered to be one of the all time legendary KORG analog synthesizers. The "KORG iMono/Poly" iPad/iPhone app completely reproduces all features of the original Mono/Poly. Four VCOs and a rich array of modulation allow a wide scope of detailed sound design. New functionality such as two multi-effects units and eight virtual patches are also provided.

In addition, 128 of the latest preset sounds that fully exploit the unique functions of iMono/Poly are built in. A sound bank containing an additional 128 sounds is also available as an in-app purchase.

Although iMono/Poly provides a vast number of parameters, it's designed with a screen structure that provides quick and seamless access to all of them. With a single tap, you can rotate between the main synth & key assign screen and the virtual patch & effect screen*). There's no need to open individual screens for specific functions, or to move back and forth between them.

KORG Gadget for iOS update
When you install both apps, iMono/Poly appears as the "Montpellier" gadget within KORG Gadget**. This means that your KORG Gadget-based music production system can now enjoy the potential of four VCOs and virtual patches.

* On the iPhone version, you can move by switching screens.
** In the case of KORG Gadget for Mac, this is expected to be added in a future update.