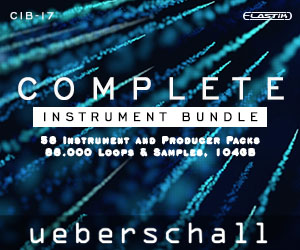 For November's giveaway we've teamed up with Ueberschall to give KVR members the chance to win the fantastic Ueberschall Complete Instrument Bundle!

All libraries can be used with Ueberschall's Elastik player, which allows quick and easy pitch and tempo changes while containing highest audio quality. This makes it possible to create just the perfect instrument performance for your next project.

The Elastik player comes for both Windows and macOS with 32/64-bit options and VST, AAX, AU and StandAlone operation. A €999 value!

Find out more about the bundle at: ueberschall.com/Complete-Instrument-Bundle

To be in with a chance of winning this fantastic bundle head over to kvraudio.com/kvrdeals-and-giveaways