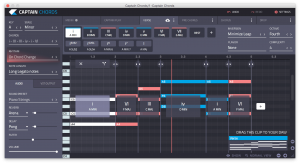 Mixed In Key has announced the release of Captain Plugins, a new series of plugins for Mac to help music composers and producers write music.

The entire suite of plugins is now available for macOS for $79 at mixedinkey.com/captain-plugins. If you buy a Captain Plugins license now, you'll automatically get Captain Play, Captain Hook, Captain Beat and one more plugin for free. They will be released this year. The price for individual plugins will increase in the future. Windows versions coming in 2018.

Tutorial on how to write your own Chord Progressions in Ableton Live Using Captain Chords: YouTube.com/watch?v=oA7tPIIyhzg